Bartonella - The Stealth Pathogen That Can Be “Seen” Without a Microscope 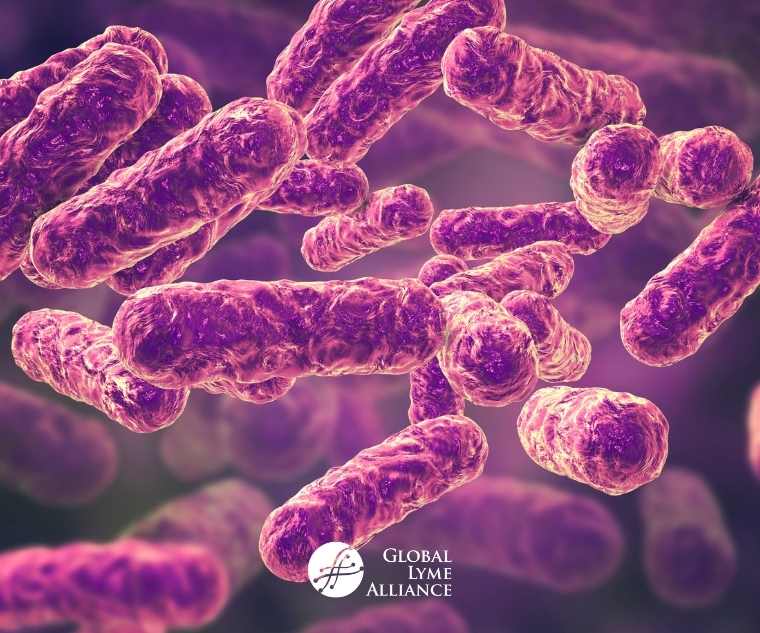 Rosalie Greenberg, MD, is Board Certified in General and Child and Adolescent Psychiatry. This article provides a general overview of the vector-borne illness, Bartonella, and the unique ways it presents in patients

Those involved in the world of tick-borne illnesses quickly come to learn that the Borrelia bacteria that are responsible for Lyme disease, as well as tick-borne relapsing fever and other illnesses, frequently live alongside other organisms inside deer ticks. Although transmission of the Bartonella species of bacteria by ticks is still questioned by some, increasing evidence points to it being an important player in zoonotic infections (those transmitted from animals to people), and a potentially significant cause of human illness.

Until eight or nine years ago if you asked me about Bartonella bacteria I’d have said, “I know nothing about it. Never heard of it.” How my world has changed. Most physicians know little about the bacteria except that it causes Cat Scratch Disease (CSD), an illness characterized by fever, enlarged lymph nodes, and occurs following a bite or scratch by an infected cat. I am sure that in the future, more and more doctors will become familiar with the potential effects of the different Bartonella species. As Dr. Edward Breitschwerdt, a world-famous researcher and pioneer in our understanding of the various species of Bartonella has asked, and not inappropriately, “Is Bartonella a modern-day hidden pandemic?”

Dr. Breitschwerdt’s question isn’t meant to frighten people, but to alert us that this bacteria is potentially more harmful than scientists have realized. Bartonella is considered a “stealth” infectious agent because it is often difficult to detect or isolate. In part this is because it takes 22-24 hours to reproduce making it a very slow growing bacterium.

How do you get infected with Bartonella?

Bartonella bacteria are found throughout the world. Illness from Bartonella is most often associated with being transmitted by an infected cat scratch or bite but it can also be from an infected dog or other animal. It can also be transmitted by multiple other carriers including fleas, sandflies, body lice, needlesticks, ants, mosquitos, chiggers, biting flies, scabies, mites, and louse-eating spiders. There is some evidence indicating that it may also be transferred through a transfusion with contaminated blood. In addition, in the medical literature there is some support for possible maternal-fetal transmission. Clearly stated, there are multiple ways to get this infection.

There are more than 20 species of Bartonella. The three most commonly known to cause illness in people are Bartonella henselae, the bacteria that causes Cat Scratch Disease, Bartonella quintana, which is responsible for trench fever, and Bartonella bacilliformis, the agent that causes Carrión’s disease.

The medical community has been aware of Bartonella infections since the early 1900’s. It wasn’t until the outbreak of the AIDS epidemic (in the 1980’s and 1990’s) that Bartonella became a bacteria of renewed interest. It was in 1992 that the bacteria were first seen under a microscope. Physicians working with AIDS patients noted that some of these immunocompromised individuals (meaning those whose immune systems weren’t working well) developed skin and/or liver lesions. These abnormalities were later found to be caused by two types of Bartonella: B. henselae and B. quintana.

Bartonella was initially considered more of an opportunistic (meaning that it goes after a weak target/person in this case) type of infection that mainly caused illness in those whose immune systems weren’t strong. Over time, it became clear that Bartonella could also cause significant disease in those who appeared to have a healthy immune system. This meant that these bacteria could affect people no matter what their immune status was.

The best known of the illnesses caused by Bartonella bacteria is the previously mentioned Cat Scratch Disease (CSD), also known as Cat Scratch Fever. Typically, this sickness comes from the bite or scratch of an infected cat, or on occasion from flea bites. Symptoms may include fever and lymph node enlargement following the break in the skin. It may be accompanied by headaches, sore throat, decreased appetite with weight loss, as well as vomiting. It’s important for physicians to remember to consider Bartonella as it can be an important cause of what is medically referred to as an FUO or “fever of unknown origin.” If transmission by a cat bite/scratch is suspected, I would recommend getting the cat tested (if possible) and properly treated (if positive) since infected cats can carry the bacteria for up to three years.

Bartonella may cause chronic illness and a variety of symptoms.

Standard medical textbooks list CSD as a self-limited infection, which means it should go away on its own. Recent evidence in the scientific literature indicates that anywhere from five to twenty percent of those who are infected have a much more serious course of illness than doctors previously realized. Symptoms can include a variety of complications resulting in a chronic ongoing serious physical illness capable of causing problems in multiple different organ systems. The bacteria may affect the eyes, heart, and central nervous system, and require significant medical attention.

As a potential cause of chronic illness, Bartonella can easily be mistaken for a variety of other disorders. In general, scientific evidence indicates that Bartonella exhibits a preference for red blood cells as well as blood vessels in different parts of the body.

Given the nature of my practice, it is the neuropsychiatric manifestations of Bartonellosis that I see most often. Bartonella bacteria can affect small blood vessels in the central nervous system resulting in a variety of neurocognitive impairments, including white matter “subcortical disconnection,” impaired executive functioning, working memory impairment, and slowing of processing speed. These effects can wreak havoc on a child’s educational performance and overall level of functioning with family and peers.

In general, neuropsychiatric symptoms associated with Bartonellosis can include moodiness, depression or elevated mood, oppositional behavior, severe agitation, anxiety, panic disorder, hallucinations, delusions, schizophrenia, schizoaffective disorder, and what can appear to be treatment-resistant depression. I think it’s important to keep in mind that if an illness is minimally responsive to the usually effective treatment, it may be because one is looking at the wrong cause. In my experience this has been especially true when it comes to a neuropsychiatric illness of which there is no family history and often has a sudden onset.

Can you "see" Bartonella without a microscope?

Recent evidence in the literature indicates that certain skin discolorations, resembling stretch marks that one gets from gaining a lot of weight or having certain medical illnesses (e.g. Cushing’s disease) can also be indications of a Bartonella infection. The skin marks have been referred to as “Bartonella striae” or more recently “Bartonella tracks.” When viewed with specialized immunofluorescent stains under an extremely powerful microscopic lens, one can see a high concentration of the bacteria in these marks. Interestingly, these bacteria have been found in the normal skin of infected individuals.

Below you’ll find pictures of “striae” or “tracks” that I’ve seen in some of my patients who have had antibody blood test evidence supporting the presence of a Bartonella infection. It’s important to remember that Bartonella can be found only intermittently in blood as it also likes to hide in tissues, making it harder to detect. Several different factors affect the sensitivity and accuracy of these blood tests. Unfortunately, testing by the more familiar, larger laboratories where most of us get our routine bloodwork, is often not sensitive enough and therefore find negative results. 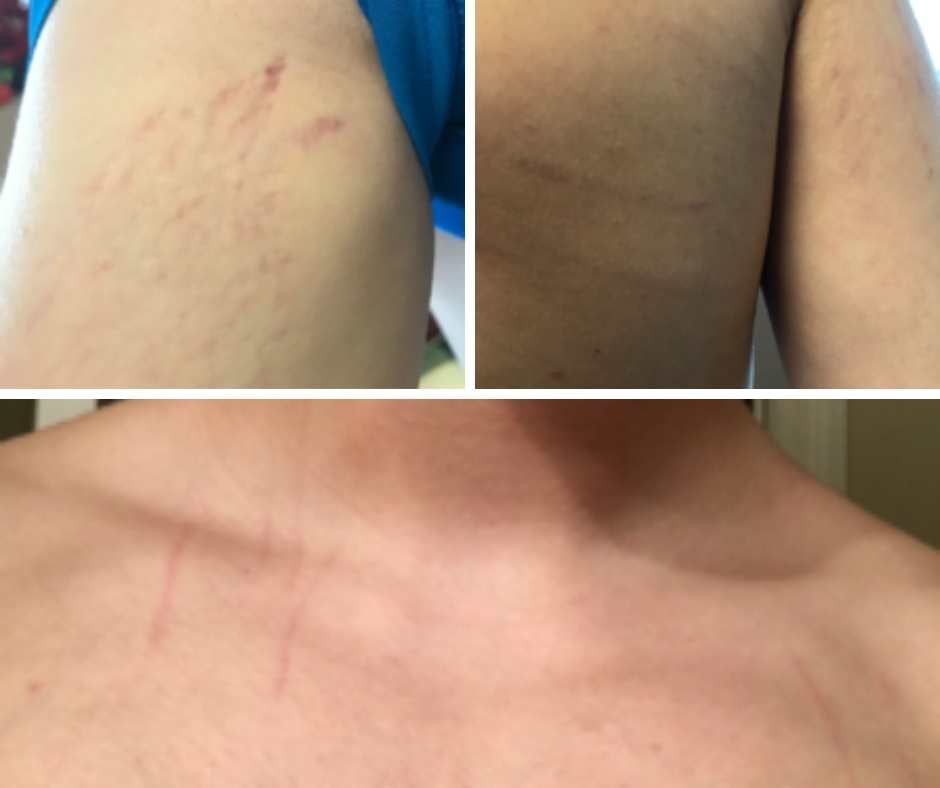 The tests look for the presence of IgM and IgG antibodies (the immune system’s response to the Bartonella bacteria). They often show no evidence of the infection even when the bacteria are present. Due to the heightened sensitivity of the testing provided by specialized laboratories such as Galaxy Diagnostics or IGeneX, there is significant increase the likelihood of a true positive test, when infection is really present. Keep in mind a person can have a negative test but still have Bartonellosis as it might be hiding in tissues at the time of the blood test. Given the long time it takes for the bacteria to reproduce, specialized culture techniques may be needed to help grow the organism out of the body. All of these reasons are why this a tricky organism to isolate and identify.

If you observe skin lesions on your child or yourself, without clear medical cause, and neuropsychiatric symptoms are present, strongly consider getting tested for evidence of a Bartonella infection. This is especially important if you have a youngster whose psychiatric symptoms are not responding to the usual psychiatric medications. Skin biopsies, unless specialized staining techniques are used, may show nonspecific evidence of inflammation but not the source (i.e. the bacteria).

As another one of those illnesses like Lyme disease, with the capability to present in multiple ways, especially with psychiatric symptoms, please remember to keep Bartonella on your radar, because your doctor may not! And be on the look-out for those “tracks” or “striae.”

To learn more and fund this project, click here. 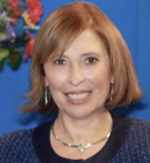 *Opinions expressed by contributors are their own. Rosalie Greenberg, MD, FAPA, DFAACAP is Board Certified in General and Child and Adolescent Psychiatry and maintains a private child and adolescent practice in Summit, New Jersey. Dr. Greenberg received her medical degree and completed her general psychiatry residency and child and adolescent fellowship (serving as Chief Resident) at Columbia University’s Vagelos College of Physicians and Surgeons/Columbia University Irving Medical Center where she subsequently served as an Assistant Professor in Clinical Child Psychiatry. She is a Distinguished Fellow of the American Academy of Child and Adolescent Psychiatry and a recipient of The NAMI Award for Clinical Excellence in addition to other accolades. She has a special interest in infection-related neuropsychiatric disorders in children.