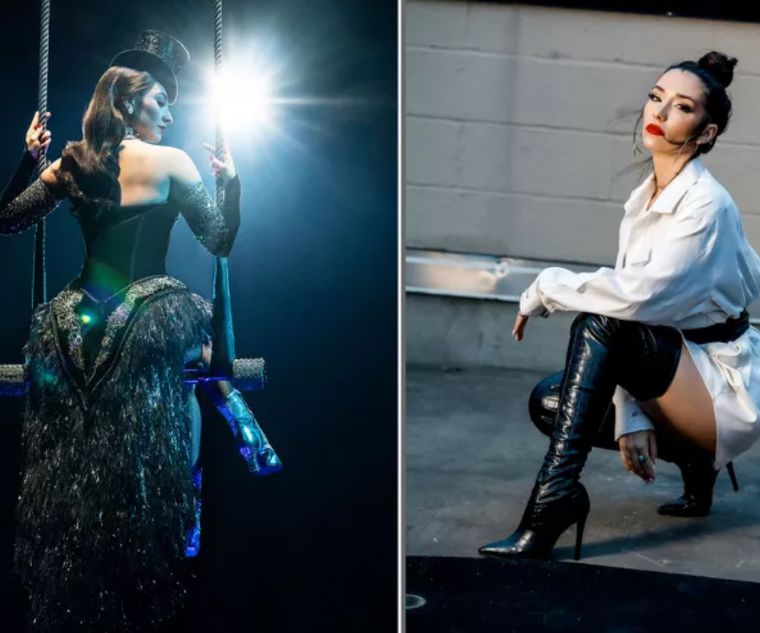 Ashley Loren is the star of Broadway’s Moulin Rouge! The Musical and recently gave a speech at the 2022 GLA Global Gala. PEOPLE interviewed her about "the lifelong condition that left her playing 'pretend' — onstage and off — as a means to get by."'

This article was written by Michael Gioia for People.com

This summer, Ashley Loren had to take a step back from Broadway's Moulin Rouge! The Musical.

The actress plays Satine, the Sparkling Diamond of the bohemian nightclub. Despite the glitz and glamor seen onstage at the Al Hirschfeld Theatre, Loren was secretly hiding an internal struggle: she had been diagnosed with chronic late-stage neurologic Lyme disease as a child and still feels its effects today.

"Satine as a character is also going through an illness and has kept the illness from her chosen family there at the Moulin Rouge, until she can't keep it from them anymore," Loren, 34, tells PEOPLE of how art was imitating life. "So it was really wild."

Loren doesn't quite remember when she started to feel symptoms. Growing up in New Jersey, she "blocked out" her numerous doctor visits and countless medical exams. Due to the neurological nature of the disease, she also experienced "extreme memory loss," she says.

After three years of being misdiagnosed, she was officially diagnosed with late-stage Lyme in first grade.

"My childhood was spent pretty sick," she explains. "I had headaches all the time. I was nauseous. I was vomiting. All of my elementary-school life, every day driving to school, we would have to pull over, and I had to throw up. I was on antibiotics for 10 years."

Though she was at the top of her class in elementary school, she says she also lost her ability to read. "It was gone," she says. "I had to relearn. I couldn't do the things that normal kids would do."

Still, she describes herself as a "fighter" — and says she found an escape from her everyday life in the arts.

"In pretending to be someone I wasn't, I sort of developed this inner strength. Because sometimes, when you're living in your own body, you don't see the way out," Loren says. "From a young age, I knew there was something to live for, even though I didn't really know what that was."

Acting became a way of life for Loren; so much so, she says she "continued to play pretend" not just for work, but as a means to "get by."

The powerhouse vocalist, who made her Broadway debut in the revival of Jekyll & Hyde featuring Constantine Maroulis and Deborah Cox, was featured on season 8 of American Idol and season 2 of This Is Us. She also sang back-up for musicians like Carly Rae Jepsen, Melissa Etheridge and Iggy Azalea.

After opening Broadway's Moulin Rouge! as an alternate for the role of Satine — performing shows that Tony Award winner KO (formerly Karen Olivo) had off — she took over as the show's leading lady full time in May.

While in Moulin Rouge!, Loren endured two bouts of COVID — the latter being difficult, with rashes, stiff neck and some trouble breathing. When she sustained neck and rib injuries during the show, she says, it "sent my body into overload."

Through numerous tests, scans and a lot of bloodwork — even wearing a heart monitor for several weeks — doctors eventually diagnosed Loren with an activation of her late-stage Lyme as well as post COVID and additional autonomic dysfunction.

The actress spent weeks out of Moulin Rouge! to recover. "This is sort of a healing journey that will continue for the rest of my life," Loren tells PEOPLE, adding that she is back on antibiotics and is on the road to recovery.

Returning to Moulin Rouge! for the first time was "one of the most emotional performances" Loren has ever done, she says, adding that the production has helped her return in "the healthiest way possible."

Descending from above the audience as she makes her entrance on the Sparkling Diamond's rhinestone-studded swing, Loren says she was suddenly overcome by mixed emotions.

Click below to watch Ashley's speech at the GLA gala.