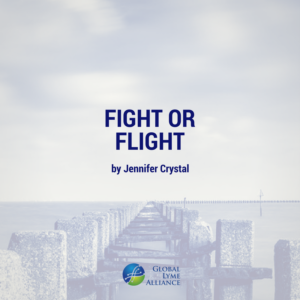 Does stress impact your Lyme symptoms? How do you react?

For a few days last week, I had trouble napping. This is usually a result of being physically and neurologically overtaxed, making me too tired to sleep. Frustrated and cranky, I got up after a couple hours and moved to the couch. I opened the windows, let the fight offspring air tickle my feet, and looked out at the budding trees. I put on some quiet music and lit a scented candle.

Instead of relaxation, I felt a familiar and unpleasant sensation creeping through my body. My breathing shortened. My legs felt jumpy. My thoughts raced. My heart rate quickened and my mouth grew dry. My whole body felt suddenly restless, even though I was so tired. As my Integrative Manual Therapist later confirmed, my limbic system had gone into “fight or flight” mode, defined by dictionary.com as “the response of the sympathetic nervous system to a stressful event, preparing the body to fight or flee, associated with the adrenal secretion of epinephrine and characterized by increased heart rate, increased blood flow to the brain and muscles, raised sugar levels, sweaty palms and soles, dilated pupils, and erect hairs.”

If I was lying on my couch relaxing, what was the “stressful event” to which I was reacting? For me, it was two-fold. First, my neurological system was stressed because it hadn’t gotten the sleep it needed.  Inadequate sleep is extremely stressful to the body. Whether I was lying on the couch or in a hammock by the beach, my overtired brain was bound to cause a fight or flight reaction.

Second, lying on the couch when I was so tired reminded me of all the times I’d been sacked out during the worst periods of my health journey, especially during my 2007 relapse. During those times I was terrified I would never get better, and the fear often manifested in a fight-or-flight response. While I wasn’t consciously thinking of that relapse after my recent napless afternoons, my subconscious must have. Remembering previous trauma, it immediately put my body into the same reaction it did at the time, in the same way that post-traumatic stress disorder gives victims flashbacks. The physiological basis for my fight or flight reaction was neurological Lyme disease, but it was exacerbated by lack of sleep and a traumatic memory.

A fight or flight reaction sounds complex, but is actually quite primitive. As Peter A. Levine explains in Waking the Tiger: Healing Trauma, “If the situation calls for aggression, a threatened creature will fight. If the threatened animal is likely to lose the fight, it will run if it can. These choices aren’t thought out; they are instinctually orchestrated by the reptilian and limbic brains.”

The Lyme patient, feeling threatened by the illness and all the neurological and physiological responses to it, has this same instinctual response. And while this makes perfect sense, it can be extremely frustrating to deal with, especially when all we really need is rest. With no energy to fight or stamina to run, we are stuck in park on our couches while our nervous systems race in overdrive.

So what’s a Lymie to do? Here are some tips that have helped me cope:

I tried to follow my own advice last week when I went into fight-or-flight, and I am happy to report that within a few days, I was napping normally again!

Next week I will be answering questions from readers. Do you have a question about Lyme? Email me at jennifercrystalwriter@gmail.com.