Keeping the Big Picture in Mind: Don’t Overlook Your Other Health Issues 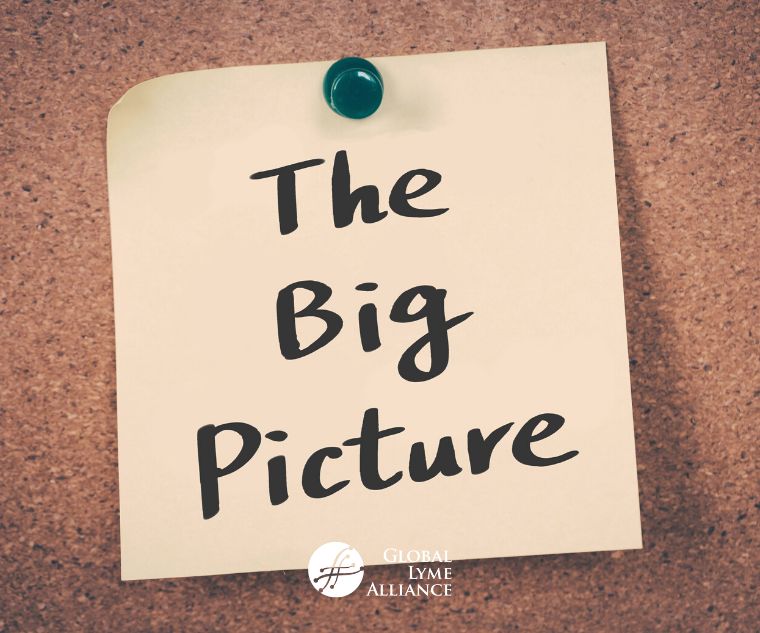 As Lyme patients, we sometimes spend so long just trying to convince people that we really do have Lyme, that we get tunnel vision. Let me explain.

Last summer, after more than a decade in remission, I started to feel an uptick of Lyme symptoms. Previously, I’d had flare-ups of babesia, one of my tick-borne co-infections, which is marked by air hunger, low blood sugar, and night sweats, but had addressed  those with anti-malarial medication. When I was overtired or overstimulated, I’d experience increases in neurological Lyme symptoms like crazy nightmares and brain fog. Dialing back my activities and resting helped relieve those symptoms.

But this was different. For the first time in years, I felt achiness in my joints. There was a steady buzzing sensation in my calves and forearms. I tired much more easily than usual. These were physical symptoms of Lyme that I remembered from the early days of my illness. I called my doctor. After hearing my report, he increased my antibiotic and anti-inflammatory medications. He also said, “We should check your Epstein-Barr numbers.”

To be honest, I’d almost forgotten that I have Epstein-Barr virus. I was first diagnosed with chronic Epstein-Barr in 2003, after a case of mononucleosis that never improved. I spent two years in bed convalescing from it but never got any better. That’s because I had underlying tick-borne infections that weren’t diagnosed until two years later.

Once diagnosed, the tick-borne infections became my main focus. My doctor put me on some immune-boosting supplements to help the Epstein-Barr, but his main goal was to quell the bacterial and parasitic infections  of Lyme, babesia, and Ehrlichia that were making the Epstein-Barr hard to fight. We focused on combatting symptoms related to tick-borne illness, not Epstein-Barr; these include joint and muscle pain, migraines, insomnia. Finally, I had a protocol besides just rest.

As I started to feel better, all symptoms decreased, including the debilitating exhaustion I felt from Epstein-Barr virus. I was still very tired, but no longer bedridden. When I returned to the land of the living—working, exercising, socializing—I stayed on immune supplements and nutritional therapies, continued adjunct therapies like integrative manual therapy and neurofeedback, and took maintenance medications for the tick-borne infections. I lived my life in the context of chronic tick-borne illness; Epstein-Barr virus was, in my mind, a predecessor that had basically been taken care of through treatment of the tick-borne infections.

That’s why I was surprised when my doctor mentioned Epstein-Barr last summer. Thank goodness he did. As it turns out, my numbers were off the charts. He called it a full relapse of Epstein-Barr.

Now, this didn’t mean my tick-borne diseases weren’t also flaring. But whereas we’d focused so heavily on those illnesses for so long, we now had to switch priorities. My doctor said, in this case, the tick-borne illnesses were only the tip of the iceberg. He suspected that a relapse of Epstein-Barr had set off an uptick in Lyme symptoms. In addition to increasing my antibiotics, then, he also put me on new supplements specifically targeted for Epstein-Barr.

Now, I’m feeling back to my usual baseline and then some. This experience taught me an important lesson: I cannot stay so razor-focused on my tick-borne diseases that I overlook other health issues. It’s easy to do so when those symptoms are usually foremost. I need to keep my entire medical history in mind when I have acute symptoms, and not just during a major public health crisis like COVID-19. I also need to remain vigilant about other health issues outside of Lyme, or Epstein-Barr, that could creep up, like making sure I have my cholesterol checked, getting yearly dermatology scans, and visiting the dentist.

As Lyme patients, we sometimes get tunnel vision. Yes, we do have Lyme,  but there may be other conditions, too; please don’t overlook them.