Anyone struggling with Lyme disease knows it can pretty much take over your life. It is an exhausting, socially isolating, life-altering illness that causes many sufferers—in addition to many physical symptoms— to endure depression, anxiety and a sense of hopelessness. The unending effort to embrace the hope that a better, more empowered life lies ahead can feel Sisyphean.

Nevertheless, despite its challenges, Tatiana Donald (pictured with her mother, Sonya Rolin), now 25, who experienced the lowest of lows as a result of being bitten twice by infected ticks—first as a child and again as an adult—has managed to emerge as a person who now says “being sick taught me a lot about empathy. I also learned I have grit.”

Tatiana was first diagnosed with Lyme when she was 12 and living in Greenwich, Connecticut. She rode horses six days a week and believes she developed Lyme from a horse carrying a tick. She was given antibiotics, but suffered a severe reaction to them, which put her “down and out and in bed” for several months, she said. But then her Lyme disease went into a dormant stage, which it can do for years without creating symptoms.

Looking back on her life, Tatiana senses the anxiety and moodiness she experienced in the years that followed may have been due to Lyme’s lingering effects. Yet she was, as she puts it, “treatment resistant” and in 2010 she headed off to the College of Charleston in South Carolina. “I felt normal, worked hard, and consistently got 4.0 grades,” she said. “But in her junior year she started to experience gastrointestinal problems.

“I was vomiting all the time,” she said, “and even had a colonoscopy, which is unusual for a 20-year old.” Naturally, as is often the case with Lyme, the doctors were unable to figure out what was wrong. By the spring, her health problems seemed again to disappear and she was back to “pushing myself hard.” But she paid a price for being so hard-driving. By the end of her senior year, she said, she was “falling apart” both emotionally and physically. 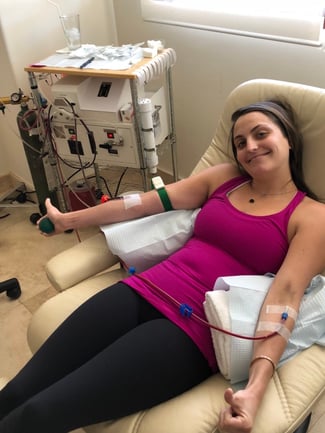 Tatiana attributed her health problems to stress, which can hurt any of us by depressing the immune system. She didn’t consider Lyme might be the culprit. “I didn’t connect the dots,” she said. “I had blinders on.” After graduating magna cum laude, she rested for a month and then took a job in marketing. Although she felt “tired and lethargic” she didn’t recognize something was seriously wrong until one day—to her horror— she found herself lost on a familiar street. She texted her boyfriend that she didn’t know where she was. They would soon learn that Lyme had announced itself again and Tatiana was experiencing “a full-on” relapse.

What followed for Tatiana were many trips from South Carolina to New York, often with her mother, for treatments. “Lyme doctors are few and far between in Charleston,” said Tatiana. When her boyfriend got a job in Connecticut, they moved to the state together and Tatiana continued her treatments, but she was unable to work. She made progress and in the summer of 2015, she had a PICC line put in for antibiotic administration.  Twelve days later she developed a blood clot in her neck and had to go to the hospital.

Like too many other Lyme sufferers, Tatiana and her mom visited a veritable host of different doctors and tried various alternative treatments to help her get better. “It’s not like a cold,” she said. “You aren’t going to get better by pushing through it.” Throughout her Lyme journey she also experienced the social isolation suffered by many with chronic illnesses—from losing friends to being confronted by those, including some family members, who would not believe she was suffering from a verifiable illness and thought it was all in her head.

“You learn who is there for you in good times and in the less good times,” she said. “I also learned that having Lyme is nothing to be ashamed of. I am not my Lyme infection, even though Lyme takes over so much of my life.”

Tatiana had been making progress with her treatments until about six months ago when she learned she had been re-infected by a second tick bite. “It’s unlikely,” she said, “but it can happen.”

She took this news stoically. “I have definitely learned that I have a keen ability to persevere,” she said. Rather than focusing on despair, she has been thinking about the future. “I’ve never been fully Lyme-free as an adult,” she said. “I’m interested in meeting a version of my adult self without Lyme and seeing what she’s like.” Tatiana says she’s thankful for the ways that her Lyme journey has helped her grow as a person. “It’s taught me about self-care and wellness, the importance of knowing what to eat, and being more open and empathetic with others generally.”  Moreover, “I know what it feels like not to be believed.”

Both Tatiana and her mother are looking forward to serving as co-chairs of Global Lyme Alliance’s Greenwich Gala this weekend. “It’s exciting to see how much money is being raised for Lyme research,” Tatiana said, “but it’s also wonderful to share the human connection with those who have been dealing with this illness.” Echoed mom Sonya: “I hope the Gala gets more people involved in this urgent cause. So many people are misdiagnosed and suffering unnecessarily for years. My heart goes out to them. I want to do whatever I can to help.”

The Greenwich Gala is a major fundraising event for GLA. It will be held Saturday, May 12, 2018 from 6:30 p.m. until midnight and features a cocktail reception, dinner, dancing and both a live and silent auction. To purchase tables or tickets, please visit GLA.org/2018CTGALA or call 917-242-1817.