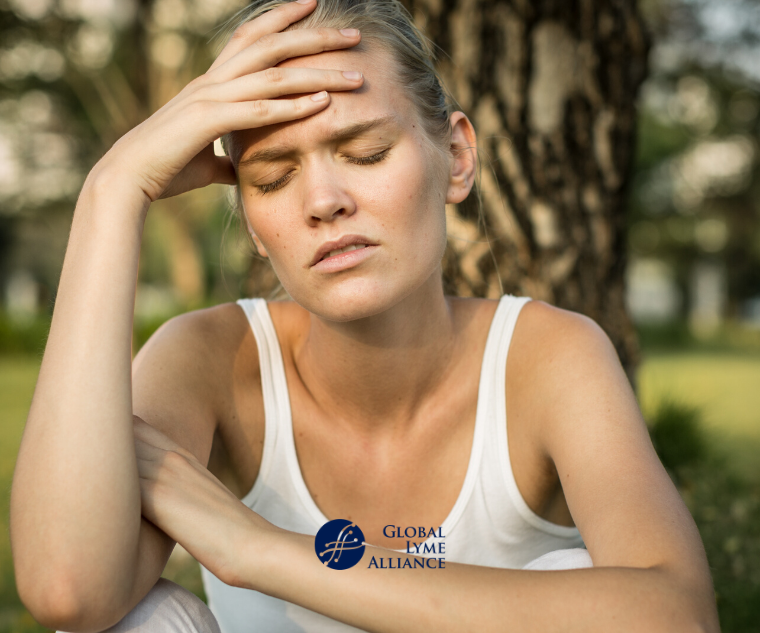 Last night I went to sleep about an hour past my usual bedtime. Revved up from a busy day which included teaching, reading, writing, and physical exertion, I was overstimulated and overtired. Instead of falling asleep, I lay wide awake despite the sleep medication I had taken. My brain buzzed with ideas. Soon, my legs started to get hot. The heat felt internal, like inflammation, not external as might occur from a heavy blanket. In fact, the room temperature was chilly and the rest of my body was cold. But my legs got warmer and warmer, the sensation traveling from my legs down into my feet. I applied lotion to the bottoms of my feet, which were hot to the touch. Groaning, I got out of bed, knowing from experience that only one thing would help: wiping my legs and feet down with a cold, wet towel.

Burning extremities—both feet and hands—are a symptom I experienced early on in my journey with Lyme and two of its co-infections—babesia and ehrlichia—though I hadn’t at that point been properly diagnosed. At the time, I had been suffering from mononucleosis for several months and had recently been diagnosed with chronic Epstein-Barr virus. The burning extremities didn’t fit the symptoms of Epstein-Barr, though, and were a mystery to my doctor.

That’s because I wasn’t only fighting Epstein-Barr. That diagnosis was accurate, but it would be another couple of years until a Lyme Literate Medical Doctor (LLMD) realized that the Epstein-Barr was exacerbated by the three underlying tick-borne illnesses just mentioned. Those illnesses explained many symptoms that could not otherwise be explained by my original partial diagnosis. In addition to burning extremities, I had other neurological symptoms, too, such as brain fog, insomnia, disturbing nightmares, and trembling hands.

I later learned that all of these symptoms—as well as psychiatric symptoms such as mood swings, anxiety, and depression—are common manifestations of neurological tick-borne illnesses. When Lyme and other tick-borne illnesses cross the blood-brain barrier, they can affect both the central and peripheral nervous systems. As Richard Horowitz, M.D. says in his book Why Can’t I Get Better? Solving the Mystery of Lyme & Chronic Disease, “The central nervous system and peripheral nervous system are preferred sites for Borrelia to establish an infection, and Lyme disease can cause both subtle and severe neurological complications.” He continues, “The spinal cord connects to the rest of the body through the peripheral nervous system. These nerves begin at the spinal cord and end in your extremities: arms and legs, fingers and toes. Affected peripheral nerves lead to symptoms of radiculitis (inflammation in the nerve root where it emerges from the spinal column) and/or peripheral neuropathy, which causes symptoms such as tingling, numbness, burning, and hypersensitivity of the skin.”

Lyme is not the only tick-borne infection that can cause these symptoms. Burning extremities can also be a sign of bartonella. Though an early test was negative, my doctor has always suspected that I may have had it since I had other tell-tales signs like red stria, which look like stretch marks on the skin. Therefore, he prescribed treatments that would cover a possible bartonella infection.

The extremities are not the only place in the body where a patient might experience radiculitis or what Brian Fallon, M.D. also refers to as radiculoneuropathy. His book, co-authored with Jennifer Sotsky, M.D., Conquering Lyme Disease: Science Bridges the Great Divide, states that “Radicular pain may be experienced as sharp, stabbing, burning, or shooting pains that radiate down along the nerves into the limbs or across the trunk.”

When I first became sick, I had burning extremities almost every night. Once antibiotic treatment started working, the symptom decreased. However, it still comes back from time to time, as it did last night. By now, I can usually predict when it’s going to happen, because I’ve noticed three factors consonant with my flare-ups: (1) staying up too late, (2) being neurologically overstimulated and/or physically overtired, and (3) eating sugar. Generally, I stick to a very low sugar diet, consuming only natural sweeteners and small amounts of dark chocolate. On special occasions, though, I indulge in gluten-free brownies. Though they are naturally sweetened, too, having a few brownies still builds up more sugar than my body is used to, likely causing an inflammatory response that, in my case, manifests as burning feet.

So what can one do about burning extremities? The first step is to see an LLMD and get evaluated not just for Lyme but for other tick-borne diseases such as bartonella. A good LLMD will prescribe a treatment protocol that should quell these and other symptoms. In the short term, though, I have found that lotion helps cool mild burning. When that doesn’t work, I resort to my cold, wet towel trick, sometimes toweling my legs two or three times before my system calms down and I can finally fall asleep.