Why do more men get diagnosed with Lyme disease than women? Is it chance? Is it job related (think about outdoor workers such as landscapers)? Or do they view the initial risk of a tick bite indifferently? Are they more susceptible and more often infected because their guard is down? While this blog doesn’t answer all these questions, it does provide some thoughtful insight into how some well-known outdoorsmen view ticks and Lyme disease.

As a child growing up in Kentucky, Michael Rudy loved to explore nature and the great outdoors. As an adult, he became an avid hiker, camper and hunter. He ventured deep into the woods of Daniel Boone National Forest in Eastern Kentucky and other area parks, sometimes hiking three or four times a week. He camped in the wilderness 30 or more nights a year, whether for archery elk hunting with his dad, backcountry adventures, or fishing. With an adventurous spirit, he climbed the rugged but beautiful Red River Gorge and every spring he avidly hunted turkeys in Georgia, Tennessee or further north, accompanied by his trusty dog Hank.

Did he ever think about protecting himself from ticks when he was out hunting? Did the thought ever occur to him while walking off trail and “bushwhacking” his way through fields and brush where ticks thrive?

“Lyme wasn’t on my radar until I saw I had a rash,” he says. Although he had been bitten several times, one tick “got” him, he says, in 2015. It took two-and-a-half years for him to be diagnosed with Lyme after a string of “negative” tests and disbelief from more than three dozen doctors. By then, his body was so severely compromised that today he is rarely able to enjoy the outdoors he loves.

Rudy’s simultaneous love of nature and lack of understanding of his Lyme risk is sadly too common today among many physically active, outdoorsmen. After interviewing men across the country, Global Lyme Alliance (GLA) learned that many still don’t believe that the bite of a tiny tick can lead to long-term health consequences. Thinking themselves invulnerable to tick-borne diseases, some even believe that if they do develop Lyme symptoms, a simple course of antibiotics will cure them, much like a shot of penicillin can eliminate a bacterial infection. Unfortunately, this is not the case for too many. In fact, new research shows that by 2020, more than two million people could be suffering from post-treatment Lyme disease. As Minnesota’s Babe Winkelman, an American sportsman known for his television programs on hunting and fishing, says: “The bulk of the [male] population is not paying attention to the Lyme threat.”

Winkelman, who has been treated effectively for Lyme three times, said he recently gave several seminars in the Quad Cities, located on the Iowa-Illinois state line. Two hundred people jammed the room for his talk about Walleye fishing, a popular sport for anglers, and another 100 were disappointed when they couldn’t get into the room. Yet when it came to Winkelman’s talk about ticks, not even 100 showed up—even though it had been heavily promoted locally. “It was pathetic,” he says. “I couldn’t believe it. They should have been crammed in there learning how to make themselves bulletproof from ticks.”

In interview after interview, the men GLA spoke to said they had friends who hadn’t taken the threat of Lyme seriously until they got sick. Winkelman shared a story about Darwin, a local golf course maintenance man, who had come to buy a couple of fishing rods from him. “I asked him if he was doing anything to protect himself from ticks,” Winkelman recalls, “and he said he wasn’t. I told him that for $10 worth of permethrin and 15 to 20 minutes spraying his clothing would mean he could [completely] protect himself. But he didn’t listen and a year later, after being misdiagnosed, he told me he was suffering from chronic Lyme. He lost his job, he’s disabled…it’s very sad.”

“People don’t understand the risk,” says Washington D.C.’s Alan Dixon (pictured at top of article), who operates adventurealan.com, a website for outdoor enthusiasts, and who also leads guided adventure trips, often in areas with wooded and brushy trails. Dixon says he is constantly surprised by just how many of his clients—whom he describes as “pretty experienced outdoors people”—don’t own clothing treated with permethrin which repels and kills ticks, or even know that permethrin exists. “I have to seriously caution them,” he says, “and strongly suggest they get permethrin-treated clothing if they go on one of our trips.”

Dixon, who was diagnosed and treated for Lyme almost nine years ago, says wearing permethrin treated clothing and using picaridin on exposed skin is now a high priority for him. He believes that individuals often are reluctant to use “chemical” repellents because of perceived health risks. “They drive around at 80 miles per hour on the beltway without their seat belts, and they hesitate to eat something that has far less than one-in-a-million possibility of giving them cancer, yet they don’t want to put on a repellent because it might have some chemical in it. That’s not rational,” he says. “The big risk is getting Lyme, not the repellent.”

Interestingly, some men admitted that they didn’t take personal protection measures even though they knew that ticks carry any number of harmful and potentially life-threatening diseases. That seemed in keeping with the old-school way men don’t look after their health. Many of us know men who will not under any circumstances go to see a doctor. But what’s being recommended to deter ticks is far simpler than that. It merely asks outdoorsmen to use the same common sense safety precautions when facing the threat of Lyme disease as they would when preparing their gear for a hunting or camping trip. Tick-bite prevention is also an important lesson to teach their children, as their sons and daughters join them in experiencing the outdoors.

“I wasn’t using precautions even though I knew about Lyme because I read outdoor journals and medical journals,” says Bob Fallert of Syracuse, New York, who enjoys spending hours in the woods hunting turkeys. “I guess I didn’t think it was that widespread.”

Fallert, who used to sell pharmaceuticals, said he sometimes visited physicians’ offices in his area and asked them about Lyme. “They told me ‘We don’t have Lyme here,’” he says. (In fact, recent studies have shown that two-thirds of ticks in Syracuse’s Onondaga County carry Lyme.) Yet about six years ago, Fallert saw a bulls-eye rash on his chest and realized he might have Lyme. He was prescribed antibiotics, even though his doctor wasn’t sure what was causing the rash, and his Lyme test—which are notoriously imprecise—was negative. “That wised me up,” he says.

We all know about the minimal tick-deterrence system: insect repellent on skin (picaridin or DEET), permethrin on clothing and shoes, tuck your pants inside your socks, wear light-colored pants, do spot checks while outdoors, and do a thorough tick check when back indoors. Nevertheless, Robert Bryan, who hunts, hikes and works in the woods as a forester in southern Maine where tick numbers are high, says that he often sees hikers wearing shorts and walking off trails, where ticks wait patiently on grass, brush, or tree trunks for a potential host. Even one of Bryan’s brothers who spends a lot of time in the outdoors landed in an intensive care unit with Lyme and a co-infection of Babesiosis because he had not sprayed his clothes, Bryan says. 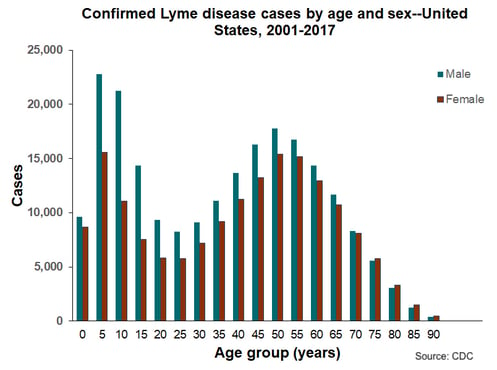 What more will it take to make people aware of the consequences of Lyme and other tick-borne diseases? At present, the ones who seem to care most are those who are already sick, or who have friends who are sick. We spoke with one man who lives in Wisconsin where he hikes and plays golf. “There are plenty of ticks here, for sure,” he says. So what about tick protection? “I would never tuck long pants into socks,” he says, adding that when he plays golf he always wear shorts because it just makes it easier for him to swing, and if he’s hiking in hot weather, he would also probably wear shorts. “I guess I fit the cliché of men who don’t pay attention to ticks,” he joked.

“Every place in the United States is crawling with ticks,” says Babe Winkelman. “Whether you’re a hiker, angler, camper, hunter, gardener, or almost anyone who ventures outside—whether you live in cities or not—we all need to get educated, become more aware, and make ourselves bullet-proof from ticks by means of simple preventative measures.”

As for Rudy, he now serves as a GLA Lyme Education Ambassador. He urges everyone he knows not to minimize the risks of Lyme. “It’s real,” he says. “It’s debilitating. And it can get really bad.”  #BeTickAWARE