by Admin at Global Lyme Alliance on October 4, 2022 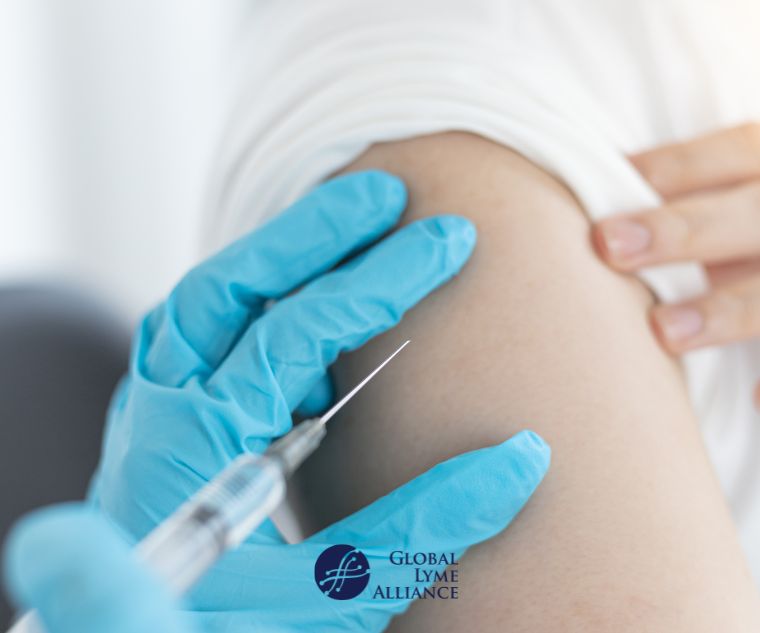 In recent weeks the Lyme world has been abuzz with news of a potential new Lyme disease vaccine, created and soon to be tested on humans by pharmaceutical company Pfizer and biotech company Valneva.

The Guardian’s UK did a recent Science Weekly podcast discussing the rise of Lyme disease and the impact of this potential vaccine. Host Madeleine Finlay spoke with Dr. Eoin Healy, a researcher of ticks and Lyme at University College Cork in Ireland, who explained why everyone should be aware of Lyme disease, and how this vaccine could help protect us against the potentially debilitating disease.

Finlay is no stranger to the serious consequences of Lyme, having watched her own father suffer from the disease. A surprise guest on the podcast, Finlay’s father explained how he got a bullseye rash after chasing a golf ball into some long grasses at the edge of a course. Finlay’s father wasn’t aware that his “target-shaped rash,” as he described it, was a telltale sign of Lyme disease. He didn’t think much of it, and didn’t realize symptoms he experienced soon after like stiff neck, stiff shoulders, and mood swings were also signs of Lyme disease. As luck would have it, he happened to hear a radio program on bullseye rashes as he was driving one day, and drove himself straight to the doctor. Thankfully, the doctor was Lyme literate, and immediately put Finlay’s father on antibiotics.

The rest, unfortunately, is not history. Finlay’s father became one of the 10-20% of people whose Lyme symptoms persist after a standard course of treatment, despite being caught relatively early. As explained on the podcast, Lyme symptoms can persist or return, or new ones can appear. For Finlay’s father, this meant a later manifestation of a serious complication of Lyme disease: Lyme carditis, discovered when he went to a doctor who found his resting heart rate to be only 45.

A vaccine could help protect against this serious disease that has already infected more than 14% of the world’s population. A former Lyme vaccine, Lymerix, made by the parent company of what is now Glaxo Smith Kline, was approved by the FDA in 1998. According to Dr. Healy, Lymerix had an efficacy rate of about 75%. However, he says that fears grew around possible side effects of the vaccine. A class action suit was taken against the company and settled without any admission of liability. But sales of Lymerix dropped, and it was pulled from the market.

Dr. Healy explains that the new vaccine works by injecting a purified version of a key surface protein of the Lyme disease bacteria, Outer surface protein A (OspA), into the human body. The person’s immune system would then develop antibodies against OspA. If a tick were to bite that person, blood sucked into the tick’s gut would bind to the OspA protein of the Lyme bacteria and kill it. This means that the Lyme bacteria would never enter a person’s body; it would die in the tick’s gut first.

The vaccine is currently entering clinical trials. Pfizer and Valneva are recruiting 6,000 volunteers in the U.S. and Europe. If the trial works, the vaccine could be approved and hit the market by 2025.

This is an exciting prospect, but until such time, it’s very important to continue to spread awareness of Lyme disease and to take appropriate preventive measures (Be Tick AWARE). It’s also important to remember that while this vaccine would provide protection against Lyme disease, it would not protect against other tick-borne diseases. Despite these caveats, the vaccine could save a lot of people from suffering. “If I knew then what I know now,” Finlay’s father says, “I never would have gone looking for that golf ball.”

Listen to the podcast here.

Additional Points to Note From GLA