The real estate ads never mentioned the deer. Thanks to a very smelly mix of chemicals we can still grow hosta, their favorite food, but the chemicals have to go on after every rain, and we now buy shrubs and other perennials according to whether the deer like them or not. But you can’t, in the end, spray everything. And the deer like our yard regardless. We drive up our driveway at night sometimes and there they stand, in the back yard by the hedge, four or five of them, just hanging out, staring in that startled deerly way—what are you doing here?—and we get out of the car and yell at them, or growl like very angry wolves, and they climb through the hedge and disappear.

But they have left ticks behind, you can be sure of that. I read somewhere that the average deer has something like 400 deer ticks living on each ear. Each ear? One of them is bound to get you.

I do my own gardening and one got me some years ago. I noticed what seemed to be a bite on my right knee but no bull’s-eye rash, which is supposed to be the marker for Lyme disease, and no tick either. So I ignored it. Big mistake. After a couple of days a redness did appear and, because Lyme disease is well-known in the Hamptons, on eastern Long Island, where we live, I made an appointment with my dermatologist, who I knew to be an expert on Lyme disease, and he explained that he couldn’t be sure, but it was best to be safe. This was a man who had saved my life by identifying a mole on my arm as a melanoma and taking if off at a stage where it was minimally dangerous. So two days later I was on doxycycline.

Too late. One day later I was sick in bed, feeling achy and stiff and weak, not interested in eating, like having the flu without the sneezing and coughing and runny nose. Then I went to sleep.

Do you know what night sweats are? I didn’t, but now I do. You wake up soaking wet. SOAKING. It’s as if you just stepped out of the ocean, you are wet head to toe, and the bed around you is equally wet and you wonder whether there’s a hole in the roof and it just rained on you. And this happens night after night. You think, this is what malaria must be like. Yet you don’t feel feverish, although you must be, it’s not like chills and fever. It is the thing I remember best about the whole experience.

In the end, the antibiotic did its job. I got better, and there has been no recurrence. I count myself lucky. I know people out here in the Hamptons who have had Lyme disease four or five times, and a few who have had it so severely that the damage it did is more or less permanent. On nearby Shelter Island, where deer are especially abundant, a large proportion of the population—I don’t have exact figures—have had it more than once. I’ve been bitten by ticks since, but I’m vigilant. If you find the tick on your body you go to any local doctor and get a prophylactic dose of doxycycline and take it right away.

We have programs out here now to deal with the deer. Some local towns hire hunting professionals to thin the population. The deer lovers, and there are many, object to the hunters and set up chemical rubs on posts where the deer come to feed on food laid down to attract them, and the deer rub against the posts. Some communities have expensive deer sterilization programs. Deer are a definite issue in the Hamptons. 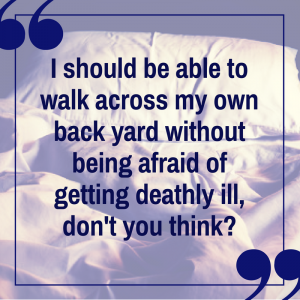 None of these programs, unfortunately, works very well. Nor are the antibiotics foolproof. If you live in an area where Lyme disease is not that common, your doctor may not be well versed in the ways of the disease and be reluctant to treat it. Some doctors rely on blood tests to see if it is Lyme disease, but they are often inaccurate. When the antibiotics are used too late, the disease can become chronic, and the symptoms persist for months or even years. I know of one person who spent six months in a hospital on an antibiotic drip before being cured.  I know of another who, after multiple infections, has never been cured.

My own solution would be to return mountain lions to the area. It sounds drastic, and it would be hard on the local cats and dogs, but deer no longer have natural predators in the East, and the population has soared. People are amazed to discover that there are more deer in North America today–more than 24 million–than there were in 1620, when the Pilgrims arrived. They are responsible for hundreds of deaths in automobile accidents every year; indeed, driving at night out here has become increasingly dangerous. My wife and I have had deer run in front of our car, bang into it from the side, and otherwise scare the hell out of us.

And they carry around an enormous number of ticks, which not only give people Lyme disease but Rocky Mountain spotted fever, babesiosis, and twelve other diseases. Mountain lions are not out of the question, to my mind.

But then I’ve had night sweats. I’ve worried about dealing with severe joint pain the rest of my life, which is one thing Lyme disease can cause. Before Lyme was first diagnosed, indeed, there used to be something called Montauk knee, a chronic pain in the knees that affected residents of Montauk in particular, where the deer population has always been high. Where there are deer, there are ticks. Once, on Martha’s Vineyard, my wife and I took a walk into the dunes there and came out with 20 or 30 ticks apiece crawling up our legs. We stripped to our undies on the spot to pick them off our bodies. My dermatologist talks about ticks as walking sewers. I sometimes think, suppose they had wings, like mosquitoes?

I garden on summer weekends, and then I check myself for ticks. I don’t want to have Lyme disease ever again. I took one off my knee–they seem to like my knees–this last June, and then took the prophylactic dose of doxycycline. It worked, I didn’t get Lyme disease. But I know I’ll get bitten again. I read somewhere that scientists have run experiments with ticks where they’ve placed them on blades of grass and the ticks have spent as much as a year on them without moving, waiting for an animal to come along and become their host. I have personally seen them in just that situation, one half of them clinging to the grass, the other half grasping the air, waiting for me, or some other host to come along.

Mountain lions. Coyotes. Whatever it takes. I should be able to walk across my own back yard without being afraid of getting deathly ill, don’t you think? Is that too much to ask? 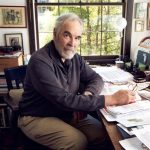 Anthony Brandt is the editor of National Geographic’s Adventure Travel series of books and the author of articles in numerous national magazines including The Atlantic, GQ, and Esquire.