Tainted Transfusions: Why Screening Blood is More Important Than Ever

The importance of screening for babesia in our blood supply is the focus of a new study published in the New England Journal of Medicine.

The last thing anyone wants from a blood transfusion is to get sick from an infectious microbe. Currently, the American Red Cross and other blood collection agencies screen for blood-borne pathogens like HIV and hepatitis viruses. But there is a malaria-like parasite called Babesia microti that can make us sick, and is not routinely screened for.

Spread by the same biting ticks that transmit Lyme disease, babesiosis can be self-limiting and asymptomatic in healthy adults. However, in the immunosuppressed–the elderly or those co-infected with Lyme disease–the illness, which is characterized by recurrent fevers and pain, can become severely debilitating and is potentially fatal. When blood from such infected patients is examined with a microscope, the parasite can be seen replicating inside red blood cells.

A new study published in the New England Journal of Medicine has shown that screening for babesia-infected blood is useful in reducing transfusion-acquired babesiosis. This research, conducted by the American Red Cross, analyzed blood donation samples obtained in Connecticut, Massachusetts, Minnesota, and Wisconsin, all states with high incidence of Lyme disease and babesiosis. 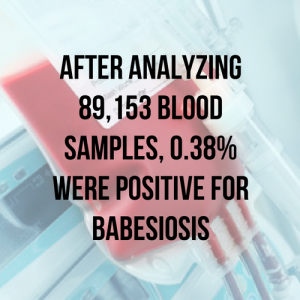 They found that after analyzing 89,153 blood samples, 335, or 0.38%, were positive for babesiosis, and these donations were removed from the blood supply. During the study period, which was from June 2012 to September 2014, there were 29 recorded cases of transfusion-acquired babesiosis. These came from blood that was not screened, and follow-up of the specific donor samples showed later that the source blood tested positive for Babesia.

Every year, about 1800 cases of babesiosis are reported to public health authorities, with 95% of cases in only 7 states. However, this is likely to be an undercount, due to low medical awareness and misdiagnosis of the disease. Presently, there is no Babesia blood donation screening test that has been approved by the Food and Drug Administration. This study and others like it will hopefully lead to such a test, by showing the vital importance of protecting our blood supply from a dangerous pathogen.