Scientists say ticks likely fled to the deep woods over the hot, dry summer, but returned to put 2016 on pace for a Lyme record.

This summer’s drought failed to reduce the deer tick population – as some experts had hoped – and Lyme disease cases have soared this fall, turning 2016 into a possible record-setting year for the disease. Through Dec. 5, Lyme disease cases were 12 percent higher this year when compared to all of 2015, according to statistics from the Maine Center for Disease Control and Prevention. “If any summer drought would have knocked the tick population back, this would have been the summer,” said Charles Lubelczyk, a field biologist with Maine Medical Center Research Institute’s “tick lab.” Rainfall was far below normal this summer, and Maine experienced many hot, dry days, which can be harmful to tick populations, experts said. But the deer ticks survived, perhaps by migrating into the deep woods and hiding under leaves. Lyme disease is transmitted to humans via the deer tick. “Under leaf litter, the ticks were as happy as could be,” Lubelczyk said. The Lyme disease cases seem to match the theory of a dry summer causing ticks to be inactive or retreating into the woods, followed by a fall of the ticks returning and finding human hosts. Lyme disease was trending below five-year averages through July, when 469 cases had been recorded, according to the Maine CDC. The five-year average was 583 cases through July, which had suggested that this year could be a mild year for Lyme disease. But instead, Lyme cases came roaring back in the fall, with 1,336 cases counted through Dec. 5. Usually, there are fewer cases in the fall, with about 70 percent of all reported cases occurring through August. Maine saw record numbers of Lyme disease in 2014, with 1,399 cases. The number of cases in 2015 dipped to 1,176 after the harsh 2014-15 winter. Paula Jackson Jones of Nobleboro, who said she has been in remission for chronic Lyme disease since 2014, said she never believed the ticks would die from the drought. “It gave people a false sense of security, and then this fall all hell broke lose with the ticks,” Jones said. Jones said with such a high number of Lyme cases, Mainers need to be vigilant about protecting themselves from Lyme disease, by wearing protective clothing, using repellents and being aware of tick habitat. Lyme disease symptoms include fatigue, dizziness, swelling, joint and nerve pain, persistent headaches and flu-like symptoms. Meanwhile, anaplasmosis, another tick-borne disease, is also seeing record numbers this year, with 358 cases so far, compared to 186 through Dec. 5, 2015. Read the entire article on Portland Press Herald. 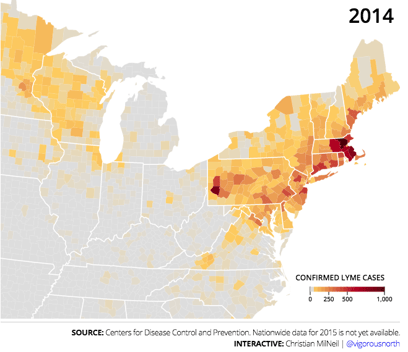 CLICK HERE to see an interactive map of increase in Lyme disease in Northeast, 2000 - 2014.