Annmarie is sharing her story in an effort to raise awareness for Lyme disease, Bartonella, and other co-infections.

After two years of strange, debilitating symptoms, ⁣⁣I was diagnosed with Lyme disease in February 2020, one month before my 30th birthday.

In those two years, I saw six doctors- all of whom attributed the sudden onset symptoms of intense fatigue, brain fog, bloating, sleep issues and muscle aches to GI dysfunction —focusing on the low hanging fruit; a positive test for Small Intestine Bacterial Overgrowth (SIBO).⁣

⁣⁣I used to eat anything and everything. I never dieted, had no allergies, and was always healthy and athletic with a ton of energy. Suddenly, getting out of bed in the morning became an alarming struggle, and I was having intense reactions to just about everything that I put into my body (gluten, dairy, legumes, sugar, alcohol etc). My stomach would blow up so large after just two beers that people would ask if I was “expecting.” My brain would get so foggy that I’d forget where I was going when I was driving. I’d forget simple words, feel completely overwhelmed, and be unable to perform simple tasks. I started experiencing significant mood swings, anxiety and depression. All of which I had never suffered from in the past. ⁣

I treated SIBO for one year, strictly following the Low Fodmap diet. During this time, I lost ten pounds (making me 121 pounds at 5’10) and my hair began to fall out in clumps. The bloating had slightly subsided but in its place, I started experiencing extreme joint pain, scary neurological symptoms and increased muscle aches. The range of motion in my neck was so bad that one day that my husband called a massage therapist to come over to our home. Feeling privileged and embarrassed, I immediately divulged all of my health issues, rattling off each symptom. She froze and said,

“Look, I’m not a doctor but it sounds to me like you have Lyme disease. Have you been tested for that?”

I explained these exact symptoms to six doctors but the first person to ever even mention Lyme was a massage therapist.

On the Right Path

The next day, my husband sought out who would become my 7th doctor (a Lyme Literate GI specialist who discovered the SIBO/Lyme connection). After weeks of extensive testing, I was finally diagnosed with Lyme and five co-infections of the disease— Bartonella, Babesia, Tick borne relapsing fever, Epstein Barr and mold toxicity.

Even though I grew up in Long Island, New York and spent a ton of time in the woods, and now live up in the mountains in California, I don’t remember ever being bit. I never had the signature “bullseye rash” and so, the possibility of Lyme never even crossed my mind. To be honest, I didn’t even understand what Lyme really was (not many people do which is precisely the problem). I knew tick bites were “bad” but that’s about it.

I learned that If the tick bite is treated right away, it is possible to recover with a couple of rounds of antibiotics but if undiscovered and untreated, the bacterial spirochete multiply, hiding in your collagen, brain, spinal fluid and lymph’s making it much more difficult to eradicate. If I (and the six doctors I saw) had been aware of the symptoms characteristic of Lyme three years ago, I’d be far less sick today.  I learned that there is no clear treatment protocol, no handbook— that Lyme is basically the Wild West of the medical field. 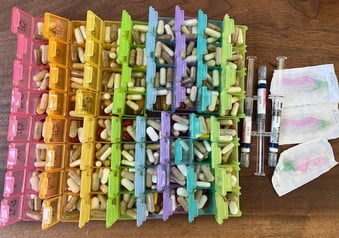 I have been treating Lyme disease for over two years now. My treatment entails taking approximately 80 pills per day— five prescriptions and a two page list of supplements. My husband gives me a shot of penicillin in the glute every two days. I need an IV to elevate my energy before social events. I still cannot workout —limited to daily walks and light yoga.

While I am much better than I was before I started treatment, my quality of life is extremely altered. I live with low grade pain everyday— joint aches, debilitating restless leg syndrome, pain in the souls of my feet, headaches, chronic sinus pain, pelvic floor dysfunction, thyroid issues, adrenal fatigue etc. Everyday social interactions make me feel like I ran a marathon. I am a stepmom to three beautiful daughters and dream of being pregnant myself though there is not enough research on Lyme to assure me that I won’t pass the disease to my child.

The Cost of Treatment

And yet, I am one of the lucky ones. I can can afford the long list of prescriptions and strange healing modalities. None of which are covered by insurance. I can afford the penicillin shots at $200 per vial, $2,000 per month. Often times I wonder if the only difference between me and someone in a wheelchair is my husband’s lucrative career and then I am just livid. Lyme disease is not biased— It can infect absolutely anyone. It can infect entire families, leaving them on food stamps as they desperately fight for their lives. The number of infections per year is growing at a terrifying rate. We need to demand funding, research and more aggressive activism immediately. Tomorrow, it could be you.

If you are experiencing sudden “strange” symptoms that are seemingly unrelated to each other, get tested for Lyme and other co-infections. 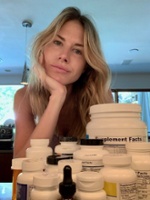 *Opinions expressed by contributors are their own