Lyme Arthritis and Inflammation: Shut It Off! 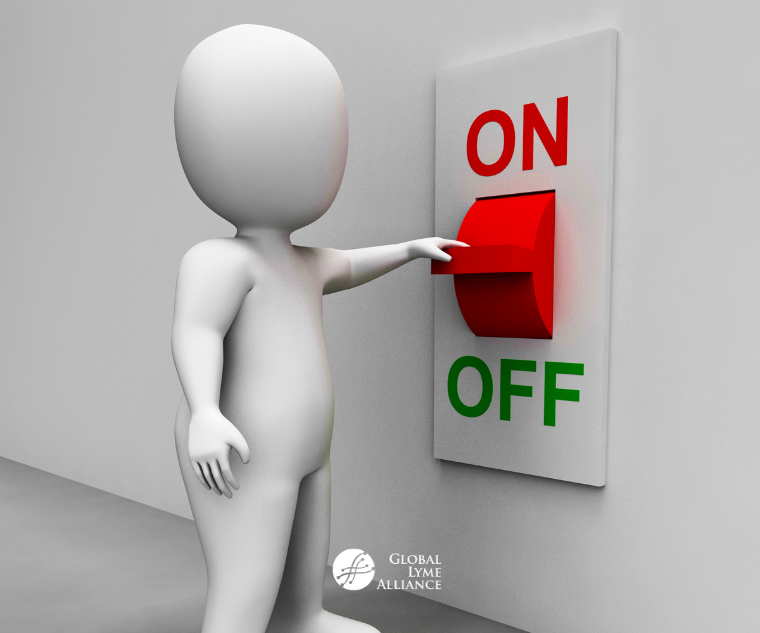 A summary of 3 Lyme arthritis studies and how our immune system can fail to shut off when there’s an infection.

Arthritis is one of the most common symptoms of Lyme disease, commonly presenting as swelling and pain in the joints. Borrelia burgdorferi bacteria, which cause Lyme disease, migrate to the joints and create the arthritic symptoms. However, growing evidence implicates not only the bacteria, but the immune system itself as playing a key role in the disease. It’s an example of how something that should protect us can also be harmful.

Our immune system has evolved to help us get rid of pathogens like B. burgdorferi. But if it’s working like a finely tuned machine, the immune system should turn off when the job is done. Instead, research has shown multiple ways that the immune system may be failing to stop the inflammatory response after infection, thus prolonging symptoms that can be very debilitating. To study this in Lyme arthritis, synovial fluid surrounding the joints can be collected from patients. It is then analyzed for the presence of immune cells and cytokines, the chemical messengers produced by cells to help kill pathogens.

Some Lyme arthritis patients have symptoms that do not improve after antibiotic therapy, known as antibiotic-refractory Lyme arthritis. Synovial fluid from these patients has been previously studied for the presence of regulatory T cells (Tregs). These immune cells, which are a subset of specialized T cells, were counted because they act as an “off switch” for inflammation. It was suspected that one pathway to long-term Lyme arthritis may be through insufficient or malfunctioning Tregs.

In the synovial fluid of antibiotic-refractory arthritis patients, an average of 5% of activated T cells were Tregs, as compared to antibiotic-responsive arthritis patients, who had 12%. Those with fewer Tregs were less responsive to anti-rheumatic medications, their arthritis took longer to resolve, and a number of them required synovectomies, or surgical removal of inflamed joint tissues, to resolve their symptoms.

A limitation of this early study was that the amount of Tregs found in the patients before and during early B. burgdorferi infection could not be analyzed, since the patients were only identified after Lyme arthritis was well underway. Might higher pre-existing Tregs be associated with quicker recovery from arthritis? If so, the number of these cells could be used as a possible prognostic marker to help with treatment decisions.

One way to determine this would be to assess Treg cells before and after experimentally infecting animals with B. burgdorferi, since such an experiment could not be done in humans. A new study in mice used an engineered mouse strain called C57BL/6 DEREG to address this question. In these mice, Treg cells can be depleted when animals are administered minute, nontoxic doses of diphtheria toxin. This was done either before or after infecting mice, and results were compared to nondepleted mice.

The contribution of Tregs after B. burgdorferi infection was studied by depleting mice one to three weeks post-infection, and then comparing joint swelling with nondepleted mice. Although these Treg-depleted mice did have increased joint swelling compared to non-depleted animals, the difference in swelling did not achieve statistical significance and was less than in mice depleted before infection.

When the joints were examined for evidence of pathology, all of the mice whose Tregs were depleted prior to infection had lymphocyte infiltration into the joints and surrounding soft tissues, indicating the presence of immune cells homing to a site of inflammation. However, only a single mouse in the nondepleted group had a mild degree of immune cell infiltration on the surface of the joint. For mice whose Tregs were depleted one to three weeks after infection, there were no inflammatory pathological changes observed in the joint tissues.

Together, the mouse studies suggest that joint swelling and pathology were more dependent on the amount of Tregs before, rather than after infection by B. burgdorferi. But Treg function, not just abundance, may also be important. In other words, what do Tregs actually do to reduce arthritis?

Experiments that assess Treg function often focus on their ability to regulate, or suppress the proliferation of other immune cells. Tregs are also studied for their inhibition of inflammatory cytokine production. In one study of a limited number of Lyme patients, T cells, of which Tregs were a subset, were collectively cultured from the synovial fluid of either antibiotic-responsive or antibiotic-refractory arthritis patients. Tregs from the refractory patients were less able to suppress the production of inflammatory cytokines like interferon gamma (IFNγ) and tumor necrosis factor alpha (TNFα) than those from the antibiotic-responsive patients.

These findings suggest that both the lower amount of Tregs, and the loss of their suppressive functions, may be why some patients have antibiotic-refractory arthritis. The study of Treg depletion in mice showed this tendency too. More studies are needed to explain how other cytokines may be involved in promoting an infection environment that ultimately, resolves or continues inflammation.

And, why some people have lower Tregs to begin with is also not yet understood – whether it is genetically determined or occurs in response to infection. But what is obvious is that the interplay between B. burgdorferi and the host immune response is complicated, depending on switches to turn inflammation on and off. More research will help us understand this regulation, and how host protection can possibly turn into harm.