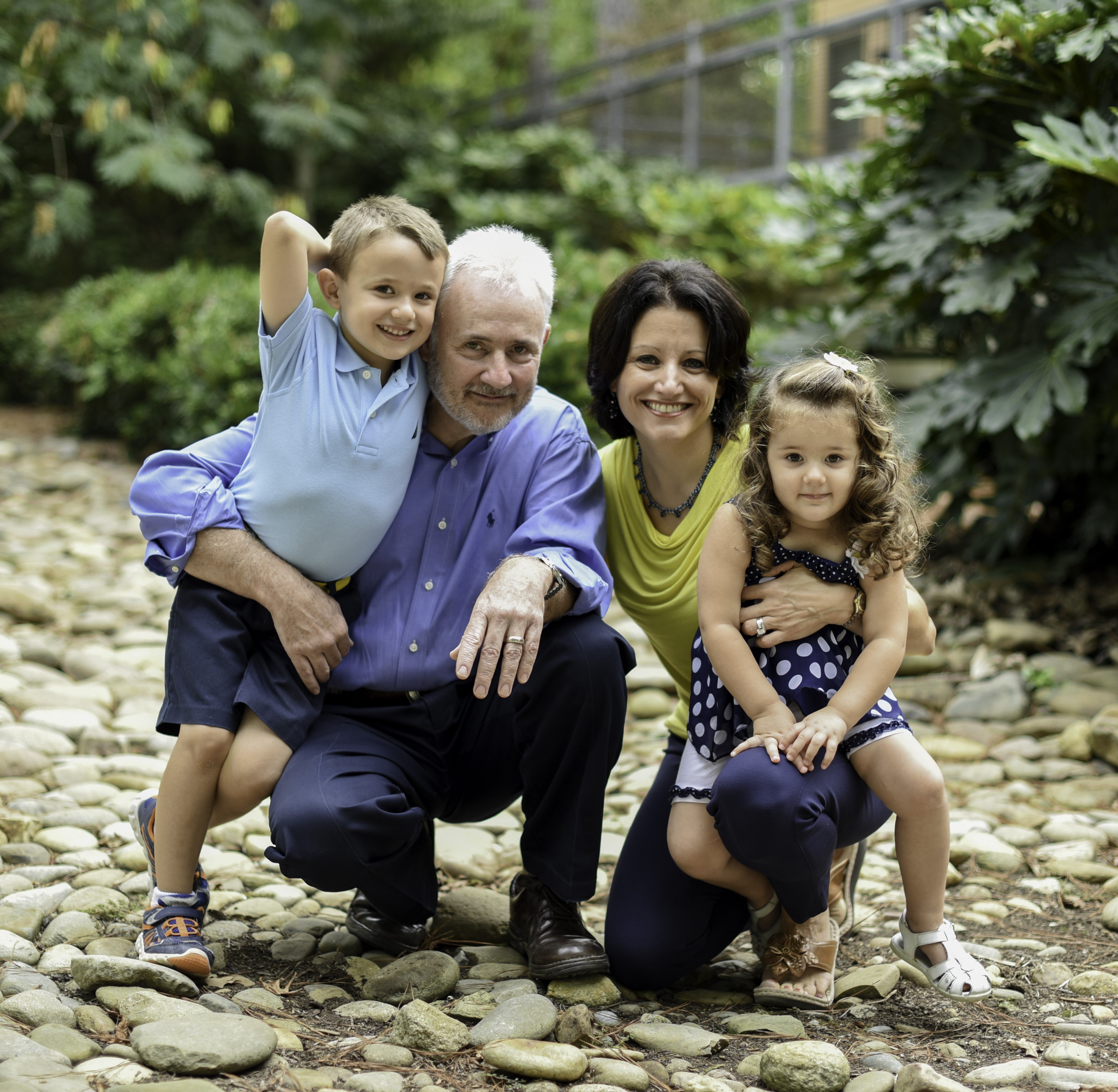 Nicole Bell, author of, What Lurks in the Woods: Struggle and Hope in the Midst of Chronic Illness, recounts her late husband's struggle with Lyme disease and Alzheimer's.

Can you briefly summarize your husband’s experience with Lyme disease and Alzheimer’s?

Russ’s first symptoms were personality changes. He became moody, irritable, and sometimes outright nasty. He’d retired early to be “Mr. Mom” to our two young children, so I rationalized it as unhappiness with that choice. We went to therapy, but it didn’t help, and I thought divorce was imminent. Then in 2016, I realized his memory was failing. He forgot simple things, like the code to our house alarm and the time to pick up the kids. After a series of doctors, he was diagnosed with late-stage early-onset Alzheimer’s disease. We were just figuring out something was wrong, but his disease was deeply entrenched.

How many doctors did you have to see, and how long did it take to get an accurate Lyme diagnosis?

Like most Lyme patients, it was a journey. We started with an integrative practitioner, who tested him for various causes, including Lyme. But Russ tested negative for Lyme on a Western Blot, and all of his other lab work was “normal.” The doctor referred us to a neurologist, and that’s when Russ was diagnosed with early-onset Alzheimer’s. But the diagnosis never made sense to us because Russ had no genetic predisposition or comorbidities. We went to four different neurologists, searching for alternate answers. We got nothing. One of them told me, “Shit Happens,” when I begged for an explanation. I still cringe at that moment.

Ironically, the doctor who figured it out was my brother. He encouraged me to get Russ tested with a lab specializing in Lyme instead of the CDC-recommended Western Blot. That’s when we finally got our answers. Russ tested positive for the three B’s—Borrelia, Bartonella, and Babesia, the bacteria causing Lyme disease and two common co-infections. But over 15 months had passed, and we had wasted critical time. 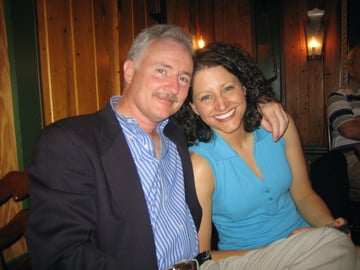 What made your brother suspicious that it was Lyme disease?

Well, his wife had suffered from health issues for years. They finally figured out she was battling Lyme and several coinfections, and he started researching the conditions. He found research papers linking Lyme to Alzheimer’s and instinctively knew it was the cause of Russ’s decline.

Lyme was my first thought when I realized Russ was sick. Russ was a hunter and was always in the woods. I pulled dozens of ticks off him over the years, but he never had the tell-tale fever and rash. Still, we suspected tick-borne illness as a cause, and I asked that very first doctor to test him. But his Western Blot came back negative, and we went in search of other answers.

You desperately searched for answers regarding your husband’s diagnosis. You also faced many doctors who brushed you off. What have you learned from this, and how should others speak up for themselves in similar situations?

I believe patients need to be their own advocates. If a doctor isn’t genuinely interested in uncovering the root causes of your illness, then get another doctor. We wasted over a year with neurologists who chastised me for digging deeper. I wish we’d spent that time with a functional practitioner committed to finding causes rather than treating symptoms.

As for doctors, I would want them to know two things. First, the standard CDC test for Lyme is grossly inadequate. A study in 2020 demonstrated that it is only 29% accurate. I can’t think of any other disease where this type of performance would be deemed acceptable and “the gold standard.” Second, ticks carry so much more than Lyme. There are dozens of bacteria, viruses, and parasites that ticks transmit. Doctors need to educate themselves and consider these tick-borne illnesses when diagnosing patients.

Tell us about your new book! What made you speak out and share your story?

The book started as something for my family and me. I began journaling to cope with the craziness that chronic illness brings. The more I wrote, the more I realized that processing our journey through writing was helping me heal. Along the way, writing took on a more significant meaning, and I knew that our story could also help others. 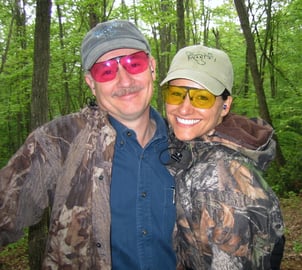 What can others with Lyme & chronic illness hope to get out of reading it? How about those without?

I think people suffering from tick-borne illness will connect with the rollercoaster of suffering from a disease that many believe doesn’t exist. I’m an engineer, and I came to the space open-minded and craving facts. I used that scientific mindset to show how broken our medical system is but in a real-life, engaging way.

But honestly, for those suffering from Lyme, the book's best use may not be for them—it may be for the people around them. Our story can engender support by letting their loved ones walk the life of tick-borne illness. Many folks outside the Lyme world have said our story opened their eyes. And I now know people who got tested because of the book and tested positive. While I’m not happy they have tick-borne diseases, I’m glad our story helped them get answers.

When and where can we buy it?

It is available on Amazon and Barnes and Noble in paperback and ebook. https://www.amazon.com/What-Lurks-Woods-Struggle-Chronic/dp/1955711011/

We treated with broad-spectrum oral and IV antibiotics for over six months. We then transitioned to a more targeted set of antibiotics, including newer therapies such as Dapsone. All the while, he was on supplements and herbals to support his immune system, detoxify, and restore much-needed vitamins and minerals.

Unfortunately, despite working with well-respected Lyme doctors, we couldn’t reverse the course of his disease. In May of 2019, I couldn’t care for him at home any longer and placed him in a residential care facility. His decline continued, and he passed away from his illness on January 14, 2022. The journey has been heartbreaking and has left our two kids, ages 8 and 11, without their dad.

How did your family and friends act during this time?

In the beginning, we isolated ourselves. Dementia is challenging to live with, particularly when afflicted so young. Russ didn’t want people to see his decline, and his mood swings were so intense that I didn’t think I could get help from others. Not reaching out to friends and family for assistance was one of my biggest mistakes.

Since I’ve opened up about our experience, friends and family have been a fantastic support network for me. We’ve developed a loving tribe for which we are immensely grateful.

What if any recommendation do you have for convincing the NIH, CDC, and IDSA that Lyme and tick-borne diseases are chronic and constitute a major, growing epidemic in the United States?

I’ve worked in medical devices for the past 15 years, and a common expression at the FDA is, “In God we trust, all others must bring data.” I think data is the key. We need to support organizations like GLA that fund critical research initiatives in Lyme and other tick-borne diseases. In the end, science will win. Research has shown and will continue to show that tick-borne pathogens are at the root of many chronic illnesses. As this scientific evidence mounts, NIH, CDC, and ISDA will change their position. I’m so thankful for GLA and the work you do to get us there.

How would you encourage patients embarking upon their Lyme journey? What do you wish you had known when you first started?

I tell people that they need to own their wellness journey. I know this sounds intimidating because most of us aren’t doctors or experts in disease. But you don’t need to be an expert in medicine or even tick-borne illness; you only need to be an expert in yourself. You know when you feel good or bad, and it’s up to you to communicate it. Watch how you respond to treatment. Keep a symptoms journal. Summarize everything you notice in a way the doctor can understand. If you have the right doctor, they will partner with you to find the roots of your disease and restore your health.

The other thing I would say is don’t ignore symptoms. We wasted precious time rationalizing the early changes in Russ. If we’d dug in sooner and demanded answers, I think Russ would still be with us. I hope others can learn from our journey so that their story ends differently.

A note from GLA:

It is critical that we share our heroic accounts with this disease, both good and bad. Like a growing chorus, accounts like Russ’s will tip the scales. Lyme has claimed innumerable victims, but as we continue to share our voices, we can ensure that their legacies are not in vain, and pave the way for answers. Our hope is that Russ’s story is a call to action, and underlines why GLA’s work is so necessary.  On behalf of Russ, it is our great task to continue his fight by conquering Lyme disease, once and for all. In consideration of Russ’s story, we would direct you or anyone you know experiencing symptoms to find an LLMD as early as possible.  Visit the GLA referral program for assistance.

If you are in need of support, visit our patient support resources page.

Opinions expressed by contributors are their own. Nicole Bell shares the story of her husband's battle with Lyme disease and Alzheimer's.