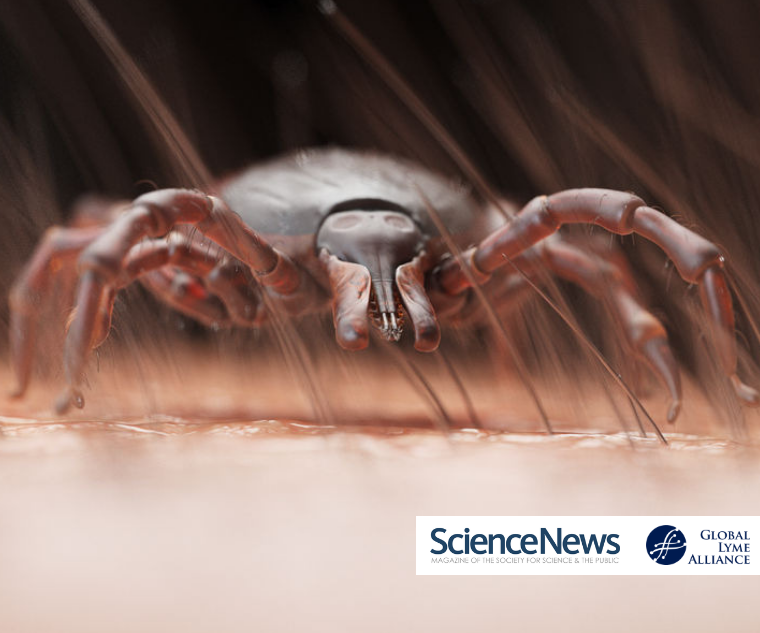 By Laura Beil, Science News, June 23, 2019
In 2005, Rachel Straub was a college student returning home from a three-week medical service mission in Central America. Soon after, she suffered a brutal case of the flu. Or so she thought. “We were staying in orphanages,” she says of her trip to Costa Rica and Nicaragua. “There were bugs everywhere. I remember going to the bathroom and the sinks would be solid bugs.” She plucked at least half a dozen ticks off her body. Back in Straub’s hometown of San Diego, fevers and achiness tormented her for a couple of weeks. Her doctor suspected Lyme disease, which is spread by ticks, but a test came back negative, and at the time, the infection was almost unheard of in Latin America. For years, Straub struggled off and on with crushing fatigue and immune problems. She forged on with her studies. Dedicated to physical fitness, she started writing a book about weight training. But in late 2012, she could no longer push through her exhaustion. “My health was shattering,” she says. By January 2013, she could hardly get out of bed and had to move back in with her parents. She describes a merry-go-round of physicians offering varying explanations: chronic fatigue syndrome, mononucleosis. She never got a definitive diagnosis, but a rheumatologist with expertise in immunology finally prescribed powerful antibiotics. Almost immediately, Straub broke out in chills and other flulike symptoms, and her blood pressure plummeted, problems that sometimes arise when pathogens begin a massive die-off inside the body. She began to feel better, but slowly. Over the next four years, she could barely leave her house.

IFFY SYMPTOM: The hallmark of a Lyme disease infection is a bull’s-eye rash. But not everyone gets the rash, and many of those who do miss it completely.

Stories like Straub’s are what make Lyme disease one of the most charged and controversial of all infections. It’s not hard to find tick-bitten patients who live for years with undiagnosed and unexplained symptoms that defy repeated treatment attempts. Patient advocates point to people who agonize for years, drifting from doctor to doctor in search of relief. Battles with insurers who won’t pay for therapy without a definitive diagnosis have played out in courthouses and statehouses. Desperate patients sometimes turn to solutions that may pose their own risks. The U.S. Centers for Disease Control and Prevention recently described people who had developed serious complications, or even died, after unproven treatments for Lyme disease. Many, if not most, of these problems are caused by the lack of a reliable test for the infection. “This deficiency in Lyme disease diagnosis is probably the most prevalent thing that is responsible for the controversies of this disease,” says Paul Arnaboldi, an immunologist at New York Medical College in Valhalla. That’s why Arnaboldi and other researchers are  trying to devise better diagnostics ( SN: 9/16/17, p. 8). The standard two-part test that’s used now, which has changed little in concept since the 1990s, may miss about half of infected people in the early weeks of illness. The test relies on finding markers that show the immune system is actively engaged. For some people, it takes up to six weeks for those signs to reach detectable levels. To find better ways to diagnose the disease more reliably and maybe sooner, scientists are trying to identify genetic changes that occur in the body even before the immune system rallies. Other researchers are measuring immune responses that may prove more accurate than existing tests. The science has advanced enough, according to a review in the March 15  Clinical Infectious Diseases, that within the next few years, tests may finally  be able to measure infections directly. The aim is to amplify traces of the Lyme bacteria’s genetic material in the bloodstream. Enough approaches are in various stages of research that some patient advocates have renewed optimism that the problems with testing may finally become a thing of the past.

In the United States, ticks pass about a dozen illnesses to people, but  Lyme disease is the most common ( SN: 8/19/17, p. 16). It’s most often caused by the bacterium  Borrelia burgdorferi, which usually hitches a ride inside black-legged ticks, also known as deer ticks. When a tick bites and latches on to a person, the bacteria enter the skin, often causing a distinct, circular bull’s-eye rash radiating from the bite. But about 20 to 30 percent of infected people never experience any kind of rash, and many of those who do simply never notice it. About 30,000 infections are reported annually in the United States, but public health experts estimate that the true number is 10 times as high. Once in the skin, the corkscrew-shaped bacteria travel into the bloodstream and then migrate into joints and connective tissues, sometimes reaching the heart and nervous system. The problem is that treatment with antibiotics is most successful when the infection is in its earliest stages — the exact time when the standard diagnostic test is least reliable.

Doctors have an easier time diagnosing other infections using a technique called polymerase chain reaction. PCR amplifies bits of the pathogen’s genetic material from a patient’s blood, making the infection easier to confirm. But PCR isn’t sensitive enough for many Lyme infections, says Jeannine Petersen, a microbiologist at the CDC’s Division of Vector-Borne Diseases in Fort Collins, Colo. Lyme-causing bacteria congregate in very low numbers in blood samples, she says, which “makes it very hard to detect the organism itself using standard methods, such as PCR.”

Unable to look for the bacteria directly, at least for now, diagnosis depends on deciphering clues from the body’s immune response. The standard test has two steps. The first looks for antibodies that respond to Lyme-causing bacteria. The second, called a Western blot, validates the diagnosis by confirming the presence of other antibody proteins that are more specific for Lyme. (The two steps are used together to reduce the odds of a false-positive test.) Because antibiotics are most effective when given early, doctors in Lyme-heavy areas commonly give antibiotics to anyone who has been exposed to ticks and has infection symptoms, such as headache, fever and muscle and joint aches. Still, not all doctors are aware that they shouldn’t wait for a positive test to begin treatment. And sometimes doctors face dilemmas because results are ambiguous, says Charles Chiu, an infectious disease physician and microbiologist at the University of California, San Francisco. Take this scenario: By definition, a positive test for someone symptomatic for less than a month must detect at least two of three proteins for a particular type of antibody. Those proteins, and the time cutoff, were chosen during a meeting 25 years ago. “But that’s a rather arbitrary threshold,” Chiu says. He and other doctors have seen patients whose results don’t fit the criteria. Does that mean there’s no infection? Or is this patient’s immune response not typical?

In the Lyme light

Instead of waiting for antibodies to amass, Chiu wants to detect genetic changes that the body makes immediately to cope with a Lyme infection. He and his team are using machine learning, an algorithm that adapts or “learns” based on data it receives, to find the precise combination of genes that are activated when the immune system first encounters the bacteria. “We look at all 23,000 genes that could potentially be expressed in response to a  B. burgdorferi infection,” he says. “We want to narrow that to the 50 or 100 genes that are specific for patients with Lyme disease.” In theory, a computer could pick up a unique signature of genes that turn on as soon as an infection occurs and a person begins to feel ill. So far, the team has found about two dozen. Working with partners from Johns Hopkins University School of Medicine, San Francisco State University and Qiagen Bioinformatics in Redwood City, Calif., Chiu’s team published data in 2016 in  mBioshowing  panels of specific genes activated in people who have Lyme disease. Twenty-nine volunteers were tested when they were diagnosed, after three weeks of antibiotics and then six months later. During an active infection, the Lyme patients had a genetic pattern that was different than the patterns of 13 people without the disease. That Lyme signature was also different from the signatures of other infections, including viral influenza and sepsis, an immune overreaction triggered by a different organism. And the patterns changed after treatment. As he searches for more genes in larger groups of patients, Chiu also wants to look for genetic patterns specific to the 10 to 20 percent of patients whose symptoms persist after treatment. As many as 2 million Americans in 2020 will  experience treatment failure, according to data published online in April in  BMC Public Health from researchers at Brown University and the nonprofit Global Lyme Alliance in Stamford, Conn. These patients “resort to unconventional treatments and therapies. It is understandable,” Chiu says. “We need objective testing to be able to document response to therapy.” Another problem impeding diagnosis and treatment is that ticks carry all kinds of bacteria. While Lyme is the most common tickborne infection, there are others, and they don’t all respond to the same medicine. “In places like Long Island, up to 45 percent of adult deer ticks are infected with multiple pathogens,” says Rafal Tokarz, a microbiologist at Columbia University’s Mailman School of Public Health. To address the variability of tickborne infections and be able to treat the correct disease, Tokarz and colleagues developed a prototype test to analyze a sample of blood for eight different infections simultaneously. The approach is still based on antibodies, like the current tests, but the goal is to have a more accurate product that works sooner after infection. The researchers described the test, which they call the tickborne disease Serochip, in February 2018 in  Scientific Reports. It looks for about  170,000 total protein fragments from eight infections, including some specific for each one. Using the test on 150 samples from patients with confirmed Lyme disease or other tick-related infections, the chip successfully picked up all confirmed Lyme cases, plus some that had been missed by conventional testing. (It also picked up other missed infections.) Tokarz’s team hopes to request approval by the U.S. Food and Drug Administration in the next two years. Read the entire article on ScienceNews.org.