The Leaps of Lyme 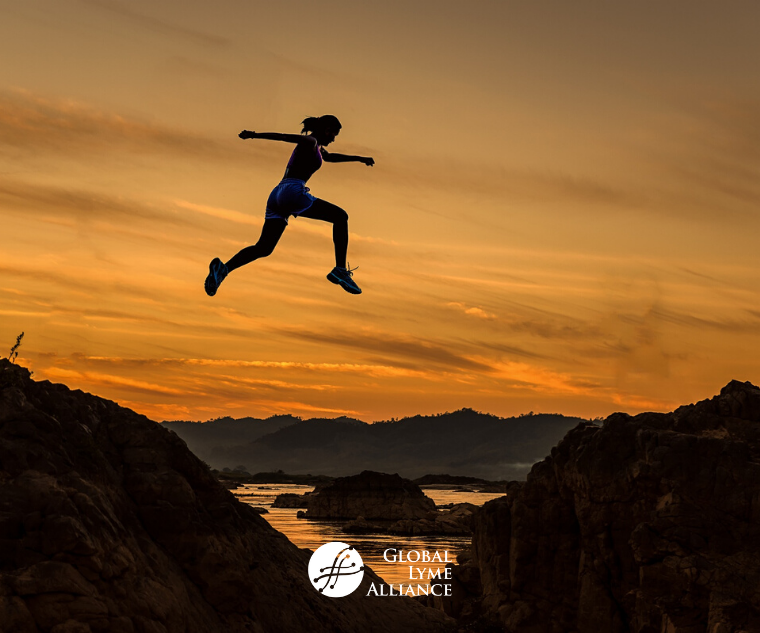 This year is a “leap year”, meaning that every four years we add February 29th to the calendar. This leap year got me thinking about the many leaps that are involved in fighting Lyme disease.

Over 427,000 people are diagnosed each year with Lyme—more than HIV and breast cancer combined—and these patients find themselves forced to take a leap into unfamiliar territory. There, they’ll find many contradictory messages, many different stories of what constitutes a typical case and its treatment , all of which usually comes amid ongoing questions about their own diagnosis.

Being diagnosed with Lyme disease—especially when it’s not a clear-cut case with a positive blood test or a bull’s-eye rash, or a late-stage case complicated by co-infections—requires many leaps of faith. Patients must have faith in their Lyme Literate Medical Doctor (LLMD), often found only after dozens of other doctors have let them down. They need faith in their treatment, which can take time to work. Patients will likely experience Herxheimer reactions, and it can take some trial and error to find the right cocktail of medications for each case of tick-borne disease. So it’s not surprising when patients wonder, “Am I on the right path?” “Do I really have Lyme?” “Am I working with the right doctor?”

I asked these questions, too, many times in my years-long journey from diagnosis to treatment to recovery. I suffered not only from Lyme disease, but from two other tick-borne co-infections—ehrlichia, and babesia—as well as chronic Epstein-Barr virus. When I saw an improvement in my symptoms I felt good about the leap of faith I’d taken in my doctors and my protocol, but when I suffered a Herxheimer reaction—or worse, when I suffered a complete relapse after going off treatment—that faith faltered. I sought second opinions. I tried different medications. I questioned the progress I had made. I questioned myself.

Luckily, my friends and my medical team would step in to remind me of the predictably relapsing nature of my illnesses. They reminded me, too, of how far I had come, of all the ways I’d had confidence in my care until then, of my positive blood work, and of other biomarker tests I’d undergone (like tests for inflammation and a SPECT scan that showed I wasn’t getting enough oxygen to part of my brain) that supported previous clinical observations. They told me to stay the course, and to have hope that I would one day live a healthy life. I took that leap of faith, and I’m so grateful I did. Had I failed to, I’m quite certain I’d still be bedridden to this day. Instead, I am enjoying remission that’s allowed me to live a fulfilling life.

Battling tick-borne disease also involves other leaps that are not always so positive. For example, as soon as I felt any improvement in symptoms, I wanted to get right back to my old life and work, exercise, and socialize. Inevitably, doing so too precipitously would cause me to crash. This happened on small and large scales. When I was convalescing at my parents’ home and on intravenous antibiotics, I might feel a surge of energy for a couple days and spend it going meetingfriends, driving myself to appointments, or walking to the end of the block. My doctor said this was a common folly of Lyme patients, wanting to do too much too soon and then paying the price.

This happened on a much larger scale when I first achieved remission and went off antibiotics entirely. I moved out of state and started a new job. These transitions were far too large a leap, and without proper autoimmune defenses, the Lyme bacteria came raging back within a few months. The second time I got to remission, I took much smaller steps, moving only a few minutes away from my parents, volunteering before committing to a rigorous work schedule, and then working only part-time. I learned that Lyme is best fought with large leaps of faith, yes, but with smaller steps of action.

Finally, recovering from tick-borne disease often involves leaps in time. I lost the second half of my twenties to Lyme, and those were years I can never get back. When I finally re-emerged, so to speak, I found myself at a different life stage than my peers. This is the time-warp that tick-borne illnesses can cause, which I discussed in a previous post, and this “lost time” has remained an issue for me to this day, though I’ve learned to accept that I’m living life at my own pace.

It’s another leap of faith—a belief in oneself—to know that one’s inability to meet a typical timeline for life milestones does not mean an inability to meet one’s life goals. In my case, since my previous leaps of faith yielded positive results, I’ll take this one, too, as I continue to make small steps forward.