Ticks are Everywhere. Don’t Believe Me? I was Bitten in My Own Bed. 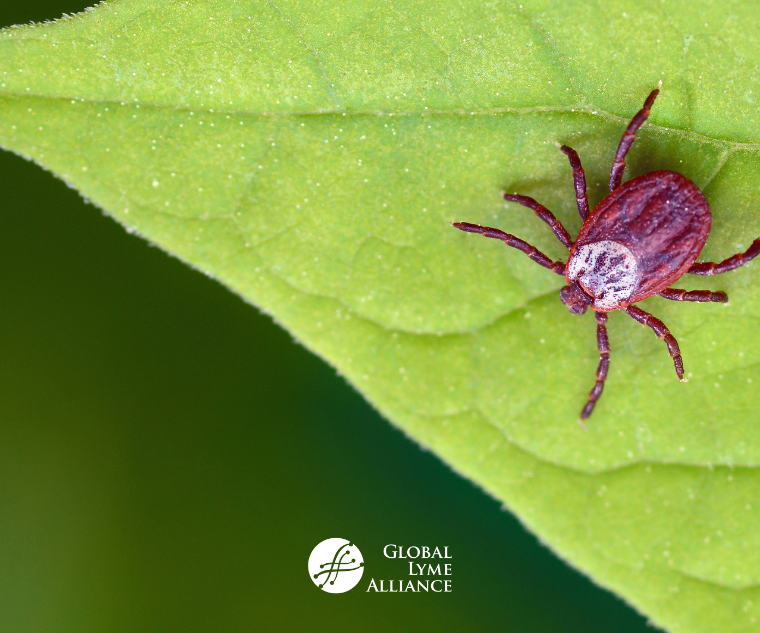 Tick prevention was never something that crossed my mind growing up, despite living in Fairfield, Connecticut. I would often go on hikes with my family and friends or walk my dog without a care in the world. I went to summer camp in Maine for eight weeks every summer for six summers, and was never bitten, or even taught about tick-bite prevention.

That all changed on Wednesday, June 26th, 2019. On that morning, I got out of the shower to start my normal post-shower routine. As I was rubbing in lotion on my left arm, I felt a small bump. I looked down to see a black tick attached to my arm. I panicked.  Everything I had read about Lyme disease while working for GLA flooded my mind.

Now how ironic is this? Luckily, the day before I was bitten, I took home from GLA a tick removal tool that we include in our Be Tick AWARE prevention kits, with the intent of giving it to my mom to use on my dog.  Little did I know that I would be using them to extract a tick from myself less than 24 hours later. After carefully removing all of the tick with the tweezers, I placed it into a plastic bag (OK, two bags just to be safe), and brought it to work to show everyone that their newest member of the team had been bitten by the very menace that those of us at GLA fear the most.

In my case, I got this tick bite from simply being in my own home. I did not go outside that day (except to go to work); I did not hike; I did not walk my dog in the woods; I didn’t go near beach grasses; I didn’t roll about in fallen leaves, and so on. I should not have gotten a tick bite, but I did. I came home from work and stayed inside for the rest of the night. Ticks are everywhere, and that is something you cannot allow yourself to forget.

Back at work I went to my boss and told her what had happened.  Soon, the whole office was invested in my story, with our scientists looking at the tick with a magnifying glass. We concluded that the tick most likely came into my house on my dog and was in my arm for less than 24 hours, since I would have noticed it when I changed my clothes the night before, or I would have seen it on my arm during the day.

I logged onto the GLA website so I could find a lab to test my tick. I ended up choosing UMass Laboratory of Medical Zoology in Amherst, Massachusetts since they offered to test the tick for common tick-borne co-infections as well as the Lyme disease bacterium.  I packed the tick up and sent it off.

The UMass Labs sent me convenient texts and emails whenever they discovered something new about the tick. For example, they updated me on when received my tick. 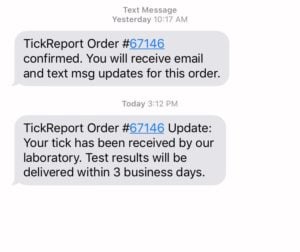 However, while getting those texts and emails was admittedly great customer service, I grew more anxious waiting for the actual test results.  My mind was swirling with the worst possible fears and I could not relax.  My heart would race every time I thought about the rick results, filling me with anxieties.

Flash forward to Monday, July 1st, 2019: The tick tested positive for the Lyme disease bacterium, Borrelia burgdorferi, but none of its co-infections.  It was a black-legged deer tick in the nymph stage, and it was only partially fed – confirming our guess that the tick was attached to me for less than 24 hours.  This fact calmed me because I remembered reading that it’s typically accepted that that the tick needs to be feeding for at least 24 hours in order to infect a person with Lyme disease.  I’ll be okay, I thought, it was only attached for around 12 hours.

On Friday, July 5th, I was waiting at the DMV when I noticed a small red rash around my tick bite. 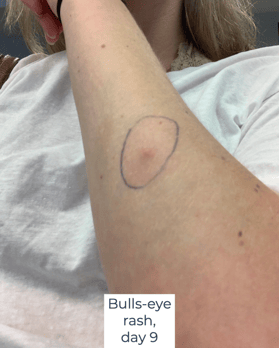 Oh no, I thought, there’s no way! I quickly scheduled a doctor’s appointment for later that day. I have a doctor who has seen me since birth, however, she wasn’t available on such short notice. So, I saw another doctor within the same practice.

When I arrived, the doctor did not believe I had been bitten by a tick and questioned me intensely.  She also stated that the rash was less than 5cm, so she did not think it was a tick bite – just an inflamed insect bite. This doctor completely dismissed my tick bite, and even told me that sending a tick out for testing was useless, ultimately crushing my confidence and making me question my certainty. Yes, this happened in Lyme endemic CT.

She sent me home with the words “keep an eye on.”  The whole appointment lasted around five minutes. I started to feel like the majority of Lyme patients out there who see doctors who steadfastly refuse to believe them no matter the iron-clad evidence. I started second guessing myself. What if I’m just allergic to tick bites generally?  What if the lab misidentified the bug in my arm? This caused extreme anxiety all weekend. 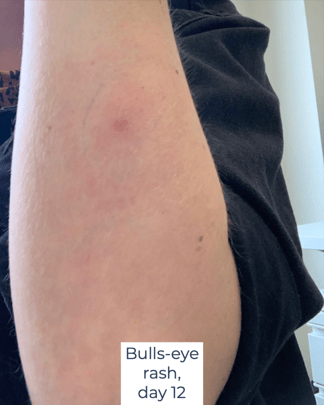 When I returned to work that Monday, I felt defeated. I hadn’t looked at my rash that morning, but when I revealed my arm to my coworkers, it was clear that a bulls-eye rash had formed.

My coworkers suggested meeting with my trusted family doctor this time to check out the rash.  Later that day, my family doctor was available, and she took a look at my arm. She gasped and exclaimed that I needed doxycycline immediately.  She even asked if she could show her intern my rash, claiming it was a perfect example of a Lyme bulls-eye rash.

My bull’s eye rash continued to get worse after I started Doxy.  Here are some pictures of the first three days after I started the antibiotics. By now the rash has diminished and is completely gone.

Here are pictures of my bulls-eye from July 9th to July 11th. 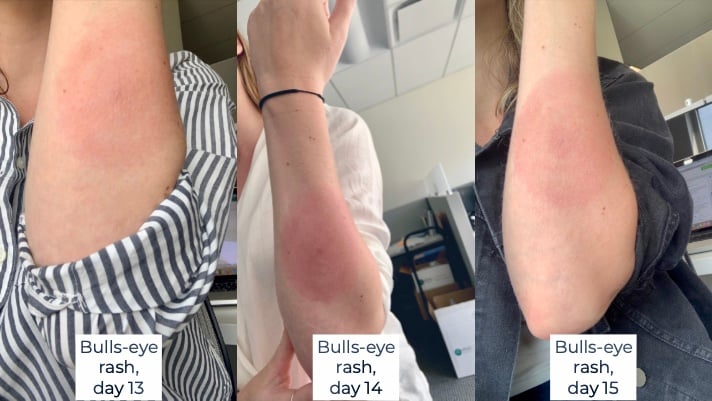 I was relieved to get a final diagnosis, I also felt extremely lucky.  Not lucky in the sense that I had contracted Lyme disease, but lucky because I had the bull’s eye rash, which is a classic symptom of Lyme. Many people who’ve been bitten by a tick never recall the tick, or even develop a rash. Lucky, too, that I had a doctor who knew the science and believed in me. Moreover, because I found the tick which had bitten me in a very conspicuous place. Sadly, a lot of Lyme patients aren’t so fortunate.

Looking back, it is almost amusing that in my whole life I was never bitten by a tick until I started working at Global Lyme Alliance. Every time I tell my story, it leaves my friends and family gaping in disbelief.

This experience has given me a small window into what some Lyme patients face, from physical fatigue to physician dismissal – it’s utterly frustrating. Admittedly, my round of horror was relatively brief, and the odds for recovery are in my favor as I started treatment so early. Consider those who are suffering for years and never know what they are suffering from, often because of the lack of understanding by too many physicians and the lack of accurate diagnostics.